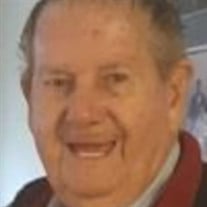 William Milton Towers, 85, of Concord – Seaford passed away at his home on Wednesday, March 24, 2021 surrounded by family. Born in Federalsburg, MD, on June 4, 1935, he was the son of the late Milton & Mabel Whitby Towers. After graduating from Federalsburg High School, “Bill” as he was best known, joined the U.S. Army where he served in the 101 st Airborne Division C Company. Bill was a business man in the Seaford area for over 60 years. In his earlier years, he had been a member of the local Jaycees and had served as the President. His working career was formulated around sales in the grocery field, vending machines and other areas of endeavor, including sales of Electrolux and other major brands of vacuum cleaners. He had formed his own company, Eastern Enterprises, from which he retired in 2012. A respected and kind man, he had helped many people, over the years, when they needed a helping hand. In addition to his parents, he was predeceased by 3 brothers – Buck, Jack & Donald Towers & a sister – Marty Griffith. Bill is survived by his wife, the former Betty Jane Sherman – Seaford: 3 daughters - Cheryl Collins, Keli Herrin & Traci Towers – all of Fort Meyers, FL; a stepson – Ricky Long – Seaford; a stepdaughter – Kathy Bradley – Ellendale; 2 brothers – Philip & Kenneth Towers – Federalsburg; a grandson – Paul Collins; 3 great grandchildren; 3 step grandchildren; 5 step great grandchildren and several nieces & nephews. A Celebration of Life Memorial Service will be announced and held at a later date at the convenience of the family. Memorial contributions, in his name, may be made to a favorite Veterans Organization or charity of your choice. The Hannigan, Short, Disharoon Funeral Home , Laurel, DE is serving the Towers Family.

William Milton Towers, 85, of Concord &#8211; Seaford passed away at his home on Wednesday, March 24, 2021 surrounded by family. Born in Federalsburg, MD, on June 4, 1935, he was the son of the late Milton & Mabel Whitby Towers. After graduating... View Obituary & Service Information

The family of William Milton Towers created this Life Tributes page to make it easy to share your memories.

William Milton Towers, 85, of Concord – Seaford passed away at...

Send flowers to the Towers family.