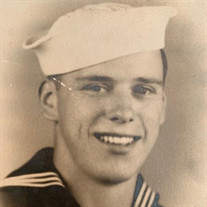 William Phillips, age 92, of Laurel, passed away at his home on July 25, 2019 surrounded by his loving family. Bill was born in Bethel at his grandparent's William and Sally Bailey's farmhouse on Bailey's Landing. He was very proud of his families farm heritage and loved Bethel. He is the son of the late Lester John Phillips and Pauline Bailey Traner. Bill graduated from Chester High School in the class of 1945. After graduation, he proudly served his country in the United States Navy. Once he returned home from the military, Bill was accepted to Goldey-Beacom College, where he studied accounting. He had a twenty-five year career with the State of Delaware as the Deputy Budget Director. Bill was meticulous with organizational skills and numbers, this led him to be one of the founders that instituted the Accounting Degree program at Delaware Technical and Community College. After Bill's retirement, he opened Phillip's Antique's and enjoyed working with his son. He was an active member in Mt. Zion United Methodist Church, acting as a Sunday School teacher, and trustee. He was a member of the Hope Lodge, lifetime member of the American Legion Post #19, lifetime member of the Bethel Historical Society, and the Sussex Toastmasters International. He is survived by his children; Trudy Parker of Bethel, Kevin Phillips of Bethel, and Scott Phillips of Laurel. Grandchildren; Brooke Cassels and her husband Jamie, Jonathan Fleetwood, Shane Phillips and his wife Beth, Shelby Phillips, and Matthew Parker and his fiancée Ashley Holloway. Great Grandchildren; Hayden Bagwell, Josiah Phillips, Camden Phillips, Amiya Phillips, and Easton Phillips. In addition to his parents, he is preceded in death by his loving wife of 69 years, Grace A. Phillips and his brother Donald Phillips. A funeral service will be held at 1:00 pm on Tuesday, July 30, 2019 at Mt. Zion United Methodist Church, 28315 Seaford Road, Laurel, Delaware 19956. A viewing will be held from 12:00 pm- 1:00 pm at the church. Reverend Bill Nack will officiate. Interment will follow in Odd Fellows Cemetery in Laurel. Contributions may be made in Mr. Phillips memory to the Bethel Historical Society, 312 1st Street, Bethel, Delaware 19931 or Mt. Zion United Methodist Church, c/o David Givens, 28829 Firetower Road, Laurel, Delaware 19956. Arrangements are in the care of the Hannigan, Short, Disharoon Funeral Home in Laurel.

William Phillips, age 92, of Laurel, passed away at his home on July 25, 2019 surrounded by his loving family. Bill was born in Bethel at his grandparent's William and Sally Bailey's farmhouse on Bailey's Landing. He was very proud of his families... View Obituary & Service Information

The family of William Phillips created this Life Tributes page to make it easy to share your memories.

William Phillips, age 92, of Laurel, passed away at his home...

Send flowers to the Phillips family.