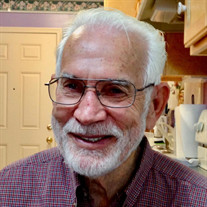 William Francis Mulder, age 88, of Seaford, passed away on December 30, 2020 at TidalHealth Nanticoke in Seaford after a brief illness. Born in Princess Anne, Maryland, on February 4, 1932, he is the son of the late Harry Mulder and Elizabeth Polyette Mulder. He was a graduate of Seaford High School's Class of 1951. William proudly served his country for 40 years in the United States Army. After being discharged from active duty, he began his career in Civil Service in the Supply Tech Administration Department. He was a member of the First Baptist Church in Seaford, National Association of Retired Federal Employees, and Nanticoke Senior Center where he and his wife, Cyndi, enjoyed delivering meals to the home bound. William enjoyed camping, traveling, square dancing, picking crabs, and carpentry work. He is survived by his present loving wife, Cynthia Mulder of Seaford; son, Michael Wayne Mulder of Salisbury; daughters, Sherry Semonavick and her husband William of Seaford, Twila McMullan and her husband Steve of Atlanta, Georgia, Kathryn Baker of Seaford, and Colleen Brittingham and her husband John of Laurel; grandchildren, Dustin Semonavick, Marie Wood, Michael McMullan, Bethany Baker, and Marisa Brittingham; great grandchildren, Conner Wood, Jaxson Wood, Ella June Semonavick, and Cameron Semonavick; sister, Noreeta Dobrich of Seaford. Several nieces and nephews also survive him. In addition to his parents, he is preceded in death by his wife of 52 years, June Mulder; and his sisters, Betty Russell and Peggy Beck. A funeral service with military honors will be held at the Delaware Veterans Memorial Cemetery in Millsboro. Due to the COVID-19 gathering restrictions, all services will be private. Social distancing and masks will be required. In lieu of flowers, contributions may be made in Mr. William Mulder's honor to the First Baptist Church of Seaford, 10016 Concord Road, Seaford, Delaware 19973 or Delaware Hospice, 100 Patriots Way, Milford, Delaware 19963. Arrangements are in the care of the Hannigan, Short, Disharoon Funeral Home in Laurel, Delaware.

William Francis Mulder, age 88, of Seaford, passed away on December 30, 2020 at TidalHealth Nanticoke in Seaford after a brief illness. Born in Princess Anne, Maryland, on February 4, 1932, he is the son of the late Harry Mulder and Elizabeth... View Obituary & Service Information

The family of William Francis Mulder created this Life Tributes page to make it easy to share your memories.

William Francis Mulder, age 88, of Seaford, passed away on December...

Send flowers to the Mulder family.