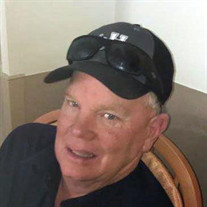 Wayne R. O’Neal, age 56, of Laurel, passed away on March 8, 2019, at George Washington University Hospital in Washington, DC surrounded by his family after suffering from a sudden illness. Born in Seaford, DE, he is the son of Agnes O’Neal and the late Fred O’Neal. He is survived by his wife of 33 years, Joanna O’Neal of Laurel, three children, Lindsay Richard (Ryan), Jaclyn O’Neal, and Shawn O’Neal, and his granddaughter, Camryn Richard. He is also survived by his mother, Agnes O’Neal, brothers Martin O’Neal (Kim) and Doug O’Neal (Debbie), and many nieces and nephews. Wayne farmed his entire life with his brothers and was very active in the farming community. A 1980 graduate of Laurel High School, Wayne was an avid baseball player when he was young. He continued an active lifestyle as he grew older, playing men’s softball, participating in local bowling leagues and the Laurel Ruritan Club, obtaining his pilot’s license, and coaching some of his children’s Little League teams throughout the years. Most recently, Wayne enjoyed playing corn hole at the American Legion and spent many rounds on the golf course with his wife and friends. Wayne was a devoted family man and attended all of his children’s sports activities, concerts, and school events. In recent months, his favorite thing to do became playing on the floor with his granddaughter, “Cam Cam”. A friend to many, Wayne could be found at the Bethel Store in Bethel, DE nearly every day to get his morning Pepsi and a breakfast sandwich on Saturdays. His friends and family could always count on him for a good laugh and have enjoyed sharing many funny stories about him. A Celebration of Life will be held at 2:00 pm on Friday, March 15, 2019 at the Laurel Church of the Nazarene, 94 Walnut Street, Laurel, Delaware 19956. A visitation will be held at the church from 12:00 pm- 2:00 pm on Friday. Contributions may be made in Wayne’s memory to the Good Ole Boy Foundation, Inc. 36111 Pear Tree Road, Millsboro, DE 19966 Arrangements are in the care of the Hannigan, Short, Disharoon Funeral Home in Laurel, Delaware.

Wayne R. O&#8217;Neal, age 56, of Laurel, passed away on March 8, 2019, at George Washington University Hospital in Washington, DC surrounded by his family after suffering from a sudden illness. Born in Seaford, DE, he is the son of Agnes... View Obituary & Service Information

The family of Wayne O'Neal created this Life Tributes page to make it easy to share your memories.

Send flowers to the O'Neal family.