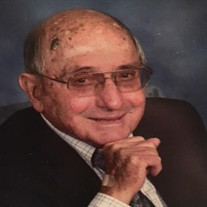 Vance Kesler Seaford - Vance Russell Kesler, 95 Vance Kesler, a resident of the Manor House in Seaford, DE, passed away peacefully Wednesday, Feb. 21 at Nanticoke Memorial Hospital in Seaford. He was born in Salisbury, NC on March 31, 1922, to the late Lewis Alexander and Mary Jane Kesler. He was the youngest of eleven siblings, all who predeceased him. His early education included eight years in a one-room schoolhouse across the road from his home, which was appropriately called the Kesler School. The teacher was always boarded in his house. He entered the Army Air Force in WWII after graduating from high school and served in a bomber squadron ground crew in Guam, earning three battle stars. After his honorable discharge, he attended NC State University where he met his future wife, Phyllis Kesler, at Meredith College. They were married in 1950 for forty years until her death in 1990. Vance had a long, successful career in sales with Pure Oil and Union Oil of CA, which took him and his family to Norfolk and Chesapeake, VA and Seaford, DE, where he retired in 1984. As an avid golfer, his retirement years were spent with many hours on the golf course and as an active member of Seaford Kiwanis. He was a faithful member of St. John's UMC and after marrying his second wife, Marian Schamus, they made it a Sunday ritual to attend her church Midway Baptist in Lewes, DE, on Sunday as well. After twenty-five years of marriage, Marian predeceased him in 2016. He is survived by his children, Jane LaJohn (Mark) of Jackson, WY, Penny Short of Seaford, DE and Russ Kesler (Joanne) of Durham, NC.; Step-children, Laurie Phoebus (Mike) and Ray Schamus (Sharleen); Eleven grandchildren, Jessica Rhodes (Nick), Erin Ricker (Kyle) Steven LaJohn, Daniel LaJohn, Amie Kesler, Kari Kesler, Brad Kesler, Corey Phoebus (Heather), Caitlyn Phoebus, Morgan Schamus and Michael Schamus; and three great-grandchildren, Ryan Ricker, Dilan and Porter Rhodes and a fourth on the way. Vance was known as a gentle, kind and patient person with a great sense of humor and passion for life. He touched many in his 95 years and was a true inspiration to his family and friends. His strong faith was a constant through his journey of life. A graveside service will be held at Providence United Methodist Church in Salisbury, NC on Monday, Feb. 26 at 2:00 PM. A memorial service will be held at St. John's United Methodist Church, Seaford, DE on his birthday, Saturday, March 31 at 2:00 PM. The family will receive visitors at the church at 1:00 PM prior to the service. Special thanks to all the staff at the Manor House for their care and compassion to Vance and Marian during the past several years. In lieu of flowers, contributions may be made in memory of Vance to the Manor House Benevolence Fund, 1001 Middleford Rd., Seaford, DE, 19973, Delaware Hospice at 16 Polly Drummond Center, Newark, DE 19711 (online at www.delawarehospice.org/donate-now/) or St. Johns UMC, 300 Pine Street Seaford, DE. 19973. Arrangements are in the care of the Hannigan, Short, Disharoon Funeral Home Laurel, DE.

The family of Vance Kesler created this Life Tributes page to make it easy to share your memories.

Send flowers to the Kesler family.