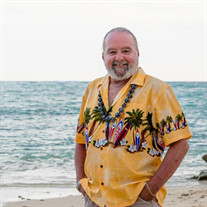 Shawn W. Gilmore, age 57, passed away peacefully on Tuesday, June 22, 2021, at the DE Hospice Facility in Milford DE with his wife, Lori Ann Gilmore, by his side. He was born February 16, 1964; in Columbus OH to Robert A. Gilmore and Billie A. Gilmore (Mustybrook). He grew up in West Fairview, PA and was a graduate of East Pennsboro in 1982 where he was big in the marching band and theatre. He was married to his soulmate Lori Ann Gilmore on November 23, 2009; in Salisbury MD and was happily married at the time of his passing. He is predeceased by his Father, Robert A. Gilmore and his Mother, Billie A. Gilmore. Shawn has 4 living brothers, Robert (Bob) A. Gilmore of Seaford DE; Richard Gilmore (Tina) of Dillsburg PA, Patrick Gilmore (Alice) of Harrisburg PA and Kevin Gilmore (Jennifer) of Harrisburg PA. He also has three children, one stepchild, two grandchildren, and several nieces and nephews. Shawn was a US Navy Veteran where he was a Cryptologist and talked about how much he enjoyed being in the service often. He was a Driver Trainer in Carlisle, PA and City Driver for YRCW Freight but later transferred to the Seaford, DE facility as a City Driver delivering in the Ocean City MD area. He competed in the DE State Truck Driving competitions where he received a trophy every time he competed. Shawn lived a happy life riding his motorcycle, working on projects around the house, doing charity work for children, and spending time with his family. He did all of these with his wife by his side. His favorite moto was “Rolling with the Changes” and he used that statement quite often. The Celebration of Life Service will be held at Hoffman Funeral Home & Crematory in Carlisle, PA; on July 10, 2021, with visitation 10 AM -12 PM and services given by Pastor Art Gilmore at 12 PM. Respectfully, with family only, a graveside burial of the urn with Military Honors will be held at the Fort Indiantown Gap National Cemetery. The time of service to be determined. In lieu of flowers, donations can be made to Angels for Alyssa, PO Box 262, Shermans Dale, PA 17090. Shawn had a passion for helping children, and this would be a way he could continue to do so.

Shawn W. Gilmore, age 57, passed away peacefully on Tuesday, June 22, 2021, at the DE Hospice Facility in Milford DE with his wife, Lori Ann Gilmore, by his side. He was born February 16, 1964; in Columbus OH to Robert A. Gilmore and Billie... View Obituary & Service Information

The family of Shawn William Gilmore created this Life Tributes page to make it easy to share your memories.

Send flowers to the Gilmore family.