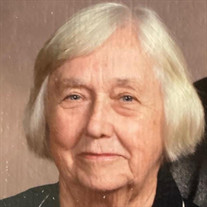 Ruth Tull of Laurel, passed on October 16th, 2021 at her home surrounded by her loving family. She was born on October 29, 1940 in Easton, Maryland. She was the daughter of the late Francis Turpin and Allice White Turpin. Ruth was a graduate of the class of 1958 of Federalsburg High School. Ruth and Bill Tull were married on June 13, 1958. They moved to Seaford and then in 1960 moved to Laurel where they lived on the family farm of Bill's mother. When their third child started school, Ruth started college at Del Tech in Georgetown and graduated from there with an Associates Degree in Education. She then went to Salisbury State and completed her Baccalaureate in 1972. Ruth started teaching fourth grade at North Laurel Elementary School. In 1976 she received her Master's Degree from Salisbury State. During her tenure at school, she taught grade four, reading to grades one through four, and then was Guidance Counselor for grades one through eight. When she was able to receive and early retirement from school in 1991, Ruth went to Wesley Theological Seminary and received her Master's in Theology. She was privileged to serve at St. John's U.M.C. in Seaford, DE. for one year, as an Associate Pastor, after being a church hire for a year. She then was sent to St. George's U.M.C. in Clarksville, DE. After three years serving there she took on Millville U.M.C. and served both of those charges for four more years. In 2000 Ruth was appointed to Unity Washington U.M.C. until her retirement in 2005. After her retirement, Ruth served Galestown and Wheatley's Churches for three years and Christ U.M.C. in Laurel for four years, She then served Laurel Charges. Ruth thought it was a wonderful opportunity to be able to serve so many people in ways that were so fulfilling by being in the ministry. Besides being active in the church, Ruth also served for 9 years as an appointed member of the Child Placement Review Board for Sussex County. Ruth was appointed to the Board of Ordained Ministry for the Peninsula-Delaware Conference for 12 years. Ruth was also appointed as a Mentor for incoming ministers over the years. She was always ready to help in any way that she could. Ruth joined Martha Rebekah Lodge in Laurel in 1978. After being Noble Grand of Martha Lodge, she became State President for two different terms. She remains an active member of the Martha Rebekah Lodge helping to prepare meals, helping on committees, and head up the Initiatory Degree for the Lodge. During her membership, she has also received the Meritorious Jewel. Ruth also enjoyed helping Bill with the Telephone Pioneer projects. She was active for quite a few years giving books and then dictionaries to schools in Delaware. One of the things that Ruth learned early and tried to instill to her children was that if you work together you can get more accomplished. Ruth learned early from her mother that there were no girl jobs or boy jobs. There were jobs that could be completed when we worked together. She and Bill always worked together on the farm, in the ministry, and in life. Ruth enjoyed being with people whether it was with the Lodge for a project, at church helping with the Soup Social each week, teaching Sunday School, or helping at the Sharptown Carnival many years, tying bags of cotton candy, or helping with other things that needed to be done. It was also exciting to have the family and friends gather for a meal or picnic. Each day seemed to bring excitement and surprises. What a wonderful, fulfilling life Ruth was able to enjoy with Bill and their family and friends. Ruth was preceded by her parents, and a son-in law, Larry Kile; grandsons, Matthew Tull and Jacob Tull. She is survived by her husband Bill Tull, with whom she was married for 63 years; children, Susan Collins (Dale), Marcia Kile, and Michael Tull (Karen); grandchildren, Monica Levine (Marc), Amanda Robinson (Jeffery), Cody Kile (Jessica), Mary Falduto (Clint), Megan Singleton (Joey), Katelin Brinson (Shane), and Calvin Collins; great grandchildren, Emma, Kaylee, Julia, Jeffrey, Dakota, Genevieve, Miles, Haven, Mirabella, and Daxton; two very special blessing will be arriving in the spring of 2022 and will be joining the family as a new great granddaughter and new great grandson. A viewing will be held on Saturday, October 30, 2021 from 9am-11am at Centenary United Methodist Church, 200 West Market Street, Laurel, DE. 19956. A funeral service will begin at 11:00 am at the church. Interment will follow in Odd Fellows Cemetery in Laurel. In lieu of flowers contributions may be made in Mrs. Ruth Tull's honor to a church of your choice or to the Martha Rebekah Lodge, P.O. Box 146, Laurel, Delaware 19956. Arrangements are in the care of the Hannigan, Short, Disharoon Funeral Home in Laurel, Delaware.

Ruth Tull of Laurel, passed on October 16th, 2021 at her home surrounded by her loving family. She was born on October 29, 1940 in Easton, Maryland. She was the daughter of the late Francis Turpin and Allice White Turpin. Ruth was a graduate... View Obituary & Service Information

The family of Rev. Ruth Tull created this Life Tributes page to make it easy to share your memories.