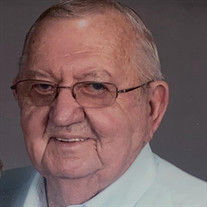 Not sure what to send?

Russell Thomas Joseph (Russ, Junior, Yogi, Pop-Pop) passed peacefully from this world on Saturday, May 7, 2022 at his son Roger Joseph's home who was there by his bedside. Russell was born in Concord, Delaware to the late Russell W. Joseph and Etta Mae Hitch. Russ is survived by his son, Roger Joseph and wife Maria of Seaford; five grandchildren, Gary Smith, Dustin Joseph, Timothy Smith, Eden Donahue and Michael Joseph. He is also survived by nine great grandchildren, several nieces, nephews, three brothers, Robert Joseph, Michael Joseph, Christopher Joseph, and his sister Joann Clayville. Russell was preceded in death by his parents, Russell and Etta Joseph; brother, Ronald Joseph, loving wife of 52 years, Kathryn H. Joseph, and daughter, Brenda J. Smith. Russell lived most of his life in Blades, except for a few years when he lived in Wilmington. As a young boy, he worked for Larrimore Dairy, then joined the Army National Guard for two years, worked at Sussex Gas and became the area manager for Protection Service Inc., where he retired from some 30 years later. After retirement, Russell decided to buy some school buses and was the owner of R. T. Joseph Bus Service and drove buses for the Seaford School District until 2006. During his working careers, he served as a lifetime member volunteer fire traffic officer for the Blades Volunteer Fire Department and Blades Town Council Member for over 50 consecutive years providing the Town of Blades with his knowledge as Roads Commissioner. His memory of Blades and its history from the early 1940's until present were always exact when he shared them with anyone who asked. Whenever Russell traveled, he couldn't wait to get back to Blades. Russ attended and supported Saint Paul's United Methodist Church in Laurel, Delaware. A viewing will be held from 12:30pm-1:30pm on May 21st, 2022 at the Hannigan, Short, Disharoon Funeral Home, 700 West Street, Laurel, Delaware. A funeral service will be held at the funeral home at 1:30pm. Pastor Bob Hudson will officiate. Interment will be held Blades Cemetery. Contributions may be made in Mr. Joseph's memory to St. Paul's United Methodist Church in Laurel, Delaware.

Russell Thomas Joseph (Russ, Junior, Yogi, Pop-Pop) passed peacefully from this world on Saturday, May 7, 2022 at his son Roger Joseph's home who was there by his bedside. Russell was born in Concord, Delaware to the late Russell W. Joseph and... View Obituary & Service Information

The family of Russell T. Joseph created this Life Tributes page to make it easy to share your memories.