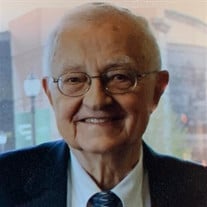 Roland William Kelly, 88, passed away peacefully surrounded by his family on Thursday, June 2, 2022. Roland was born in Frankford, Delaware, on October 6, 1933, to William and Hazel Kelly. He graduated from Lord Baltimore High School in 1951, and served in the US Army during the Korean War. He then worked through the ranks at E.I. DuPont and was an R & D Tech when he retired after 40 years of service (1952-1992). He married his wife, Marjorie Kelly, in 1964, and moved to Seaford that year. During his time at DuPont, he worked on the development of Stain Master carpet and other DuPont products. He made many friends at DuPont and continued to cherish those memories until his final days. Roland had a deep and abiding love for his family and his Lord Jesus Christ. He spent a great deal of time in service to the church and to Denton Camp. He was on the board of his local church for 49 years(with several of those years being Board Chair). He served on the Denton Camp Board, the District Board of Administration (DBA), and was also a Delegate to the General Conference of the Wesleyan Church. He enjoyed so many things (coffee, car shows, church, family and ice cream), but perhaps the most defining thing about Roland was that he was a man who loved the Lord. Roland was preceded in death by his wife, Marjorie Kelly and his parents, William and Hazel Kelly. He is survived by his brother, Ronald Kelly(Tana), his son RW Kelly(Karen) and daughter Carla Linder(Scott), grandchildren: Kenny Kelly(Jen), Ryan Kelly(Kari), Ethan Linder(Sarah), Emma and Ellie Linder, great grandchildren: Aiden Kelly, Gavin Kelly, Brynlee Kelly, Hayden Kelly, Ezra Linder, Isaiah Linder, Teagan Kelly and Jack Linder. Funeral services will be held at Laurel Wesleyan Church - 30186 Seaford Rd, Laurel, DE on Thursday, June 9th at 1:00 pm. A viewing will also be held from 12:00 pm-1:00 pm preceding the funeral. Pastor Scott Conn will officiate, interment will follow in the Seaford Odd Fellows Cemetery. Please consider a donation to Laurel Wesleyan Church-www.laurelwesleyan.org. Arrangements are in the care of Hannigan, Short, Disharoon Funeral Home in Laurel, DE. Online condolences may be sent to the family by visiting www.hsdfuneralhome.com.

Roland William Kelly, 88, passed away peacefully surrounded by his family on Thursday, June 2, 2022. Roland was born in Frankford, Delaware, on October 6, 1933, to William and Hazel Kelly. He graduated from Lord Baltimore High School in 1951,... View Obituary & Service Information

The family of Roland William Kelly created this Life Tributes page to make it easy to share your memories.

Send flowers to the Kelly family.