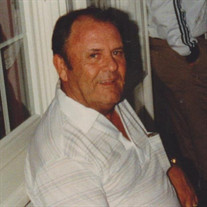 Roland Joshua Hill, age 89, of Laurel, Delaware passed away on Sunday, July 21, 2019 peacefully at his home. Born on February 23, 1930 in Laurel, he was the son of the late Cecil J. and Frona (Hastings) Hill. At the age of 16, Roland began farming the family farm and continued until he became to ill. He was an accomplished craftsman, building his own Chris-Craft in his dad's barn in the late 50's, which he got to enjoy every Sunday by taking his family out boating. Roland was always up for new adventures, he took pilot lessons in his 30's and learned to ski at the age of 50. He took every chance he got to head to the mountains, He loved to travel and was an avid hunter and excellent marksman. NASCAR was one of his passions and he attended many races. One of his greatest joys was teasing those he loved the most. Roland is survived by his companion of 23 years, Nancy Lowe; his children Carol Oldach (Hugh), David Morgan (Janet), Debbie Taylor (Kenny Mann), Susan Steen (Eddie), and step-daughter, Barbara Hudson (Benny); fourteen grandchildren, twenty seven great grandchildren and one great-great granddaughter. In addition to his parents, he was preceded in death by his wife of 32 years, Mary "Fuss" Gordy Hill; sons, Gary and Robert Hill; two grandsons, Darryl Hill and Scott Morgan; and one great granddaughter, Savannah Lemon. The family would like to extend their gratitude towards Caring Hearts Home Care, Ms. Barbara Carter, Delaware Hospice and Deer's Head Hospital Center, Kidney Dialysis Unit for the loving care they provided. In lieu of flowers, contributions may be made in Roland's memory to Delaware Hospice, 100 Patriots Way, Milford, Delaware 19963. A graveside service will be held at 2:00 pm on Friday, July 26, 2019 at Odd Fellows Cemetery in Laurel, Delaware. Pastor Johnny Rogers will officiate. The family requests casual attire. Arrangements are in the care of the Hannigan, Short, Disharoon Funeral Home in Laurel.

Roland Joshua Hill, age 89, of Laurel, Delaware passed away on Sunday, July 21, 2019 peacefully at his home. Born on February 23, 1930 in Laurel, he was the son of the late Cecil J. and Frona (Hastings) Hill. At the age of 16, Roland began... View Obituary & Service Information

The family of Roland Joshua Hill created this Life Tributes page to make it easy to share your memories.

Roland Joshua Hill, age 89, of Laurel, Delaware passed away on...

Send flowers to the Hill family.