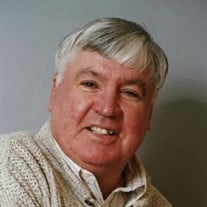 Robert Jacob Wheatley, 77, of Laurel DE passed peacefully early morning March 22, 2020. He was born in Milford Delaware, son of C. Parker and E. Arnette (Gootee) Wheatley. He attended Laurel High School and received a Bachelor’s Degree in Agriculture Science, while enjoying some mischief, at the University of Delaware. He wed his best friend, Billie Jane (Elliott) in 1965 and had two children, Elliott and Celeste. Robert grew up working on the family farm. He enjoyed a lot of the freedom the farm provided which often caused his mother a lot of worry. Jumping off the Bethel Bridge, his horse returning home without him, and many other daredevil adventures. Robert took over the farm after his father’s retirement and spent his early years working tirelessly on the farm and also as a mailman. Through the years he enjoyed being an active member in his community. He was a long time member of the Laurel Lions Club, earning a standing ovation for singing “Country Roads” at his first “Show Boat” performance. He volunteered his time for many years on the Board of Directors for the Laurel Auction Market and the Laurel Grain Company, where he also served as President for many years. As a dedicated volunteer and active member of St. Philips Episcopal Church, Robert served many years on the vestry, acting as Senior Warden several times. Robert was acting President of the Indian River Marina & Pier since 1996 in Oak Orchard, Delaware. He leaves his wife of 55 years, Billie Jane; his son Elliott Parker Wheatley of Laurel; and daughter Celeste W. Lewis and husband, David H, Lewis, grandson, Rider W. Lewis and granddaughter, Hunter J. Lewis of Highland Park, IL. He also leaves two sisters, Alice Layton and Agnes O’Neal, brother in law, Lloyd Elliott and wife Pam (Tell), and many nieces and nephews. He was predeceased by his parents, his brother, Cyrus Parker Wheatley Jr. and brothers in law, Richard Layton and Fred O’Neal. He will be remembered as an honest, hardworking, and dedicated husband, father, Pop Pop, uncle, brother, and friend to many. We can’t forget his love for the Statler Brothers too, going to as many concerts as he was able. His grandchildren will miss his frequent visits to Chicagoland to celebrate holidays, birthdays, special events, performances, and sporting events. They will also miss boating, crabbing, skiing, and tubing with him as they loved to do in the summers in Delaware. Many of his friends will miss visiting with him or being the recipients of the bushels of crabs he caught at his favorite local getaway, Oak Orchard, Delaware. He did what he always said he would, “I’m not going to retire, I’m going to expire.” Due to the mandates currently imposed related to the Covid-19 pandemic, funeral services will be private and held at Hannigan, Short, Disharoon Funeral Home in Laurel, Delaware. A memorial service will be held at a later date at St. Philip’s Episcopal Church, Laurel, Delaware when permitted. In lieu of flowers, memorial gifts in Robert J. Wheatley’s memory can be made to: Laurel’s Good Samaritan Aid Thrift Shop 115 W Market St Laurel, DE 19956 Phone: 302-875-2425

The family of Robert Jacob Wheatley created this Life Tributes page to make it easy to share your memories.

Send flowers to the Wheatley family.