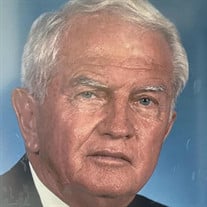 Robert L. Venables, Sr. Former Delaware State Senator Robert L . Venables Sr., 88, of Laurel, Delaware, passed away peacefully at his home on December 18th 2021, surrounded by his family. Bob was born on January 21, 1933, in Bethel, Delaware, one of the five children of William Ben and Grace Venables. His siblings included sisters Betty and Barbara and brothers Bill and Bruce. He was a graduate of Laurel High School, where he was well known for his athletic abilities in football and baseball. Bob was highly regarded as an illustrious and compassionate member of his community, sacrificing countless hours to serving others less fortunate and helping build a better place to live for the citizens of Laurel. Bob and his brother Bill gave back to their community after it was hit hard by Hurricane Hazel in 1954 by rebuilding damaged homes. This event led to the founding of W.B. Venables & Sons, Inc., a construction company started by Bob and Bill later joined by their father and younger brother Bruce. The company created many job opportunities for local citizens by constructing numerous commercial & residential projects all over the Delmarva Peninsula. Bob was honored by his community in 1980, when he was named Laurel Citizen of the Year. He served on many local committees, including the Laurel Park Committee, and chaired the committee that oversaw the construction of the Schollenberger Sports Building that was donated by W. B. Venables & Sons, Inc. Bob also served on the board of directors for Better Homes of Laurel and Carvel Gardens. He was founding president of Good Samaritan Aid, member of the American Legion Home Post 19 and served on the board of directors for Centenary United Methodist Church. Bob also served his country by enlisting in the National Guard and held the rank of sergeant 1st class. In 1988, Bob was elected Delaware State Senator, representing the 21st District, and served the state ably and well for 26 years. In mourning Bob’s passing, Senate President Pro Tempore David P. Sokola called him an environmental steward and passionate advocate for working families. "Whether it was fighting to protect Delaware's vital family farms, our beautiful state parks, our thriving wildlife areas, or expanding our network of bike trails, nobody worked harder to preserve our natural resources and enhance our quality of life than Bob during his 26 years of public service," Sokola. A hiking & biking trail (Bob Trail) at Trap Pond State Park and the park (Venables Park) in downtown Laurel are both named in honor of Bob Venables. When Bob was a teenager, he found the love of his life, Laura Freidel. They became husband and wife on October 10, 1953 . Their life-long love for one another produced six children, 15 grandchildren, and five great-grandchildren. Bob was recognized as a devoted and loving husband and father who shared with the family his passion for many outdoor hobbies including long walks in the woods, bike riding, and spending time at the beach however everyone knew that fishing was his favorite past time. To his children, he will always be remembered as a father who modeled integrity, leadership, humility, and compassion, and instilled in their lives a work ethic helping to anchor successful careers and loving families. The family mourns the loss of a great Dad who lived an extraordinary life that touched so many individuals. He truly left a ​ legacy for all to mirror. The family is comforted in knowing that Bob trusted the Lord Jesus as his personnel savior and now dwells in the house of the Lord, awaiting the time when they will be reunited again. He was preceded in death by his wife, Laura, son Jim, parents Ben and Grace, and sisters and brother Barbara, Betty, and Bill. Bob is survived by his younger brother, Bruce (Lisa); brother-in-law George Freidel Junior; children Lee (Sarah), Beth Messick (Bobby), Blair (Alison), Jeanne Wood (Patrick), Chip (Jodi); and by grandchildren Drew, Paige, Dustin, Gray, Hannah, Amy and Nathan Venables; Josh and Jared Messick; Ryne (Kayla), Grace, Jim (Elise) and Lara Lee Wood; and Travis (Naomi) and Hannah Venables; and by great-grandchildren Abel, Owen, Job, and Beckhem Wood, and Grayson Venables. A viewing will be held on Wednesday, December 29th, 2021 from 11am-1pm at Centenary United Methodist Church, 200 West Market Street, Laurel, Delaware 19956. A funeral service will follow at 1:00 pm at the church. Reverend Dean Perdue will officiate. Interment will follow in Odd Fellows Cemetery in Laurel. Arrangements are in the care of the Hannigan, Short, Disharoon Funeral Home in Laurel, Delaware.

The family of Robert L. Venables Sr. created this Life Tributes page to make it easy to share your memories.

Send flowers to the Venables family.