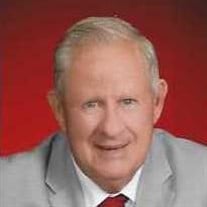 Richard Milton Joseph, age 79, of Laurel, DE, passed away on June 26th 2020 at Nanticoke Memorial Hospital in Seaford, DE, with his loving wife, Barbara, by his side. Born on February 5th 1941 in Johnstown, Pennsylvania, he is the son of the late Russell Joseph and Lovica Baker Joseph. Affectionately known as “RJ”, he graduated from United High School in Armagh, PA in 1959 where he studied Vocational Agriculture. He was particularly proud of the Keystone Degree that he was awarded for farming in 1960. After high school, he enrolled and later graduated from Williamsport Technical Institute with a degree in Diesel Technology in 1962, the school later became affiliated with Penn State University to become the Pennsylvania College of Technology (Penn College). He was active with the Alumni Association until present and loved Nittany Lion Football. He earned a teaching certificate for Diesel Mechanics from the University of Pittsburgh and numerous teaching and training certificates from Caterpillar, Inc. (CAT). RJ worked for CAT heavy equipment dealerships including Beckwith Machinery Company of Indiana, PA; Giles & Ransome Inc. in Bensalem, PA; and as Facility & Operations Manager at Cleveland Brothers in Indiana, PA. He enjoyed mentoring young diesel technicians to progress their careers within the CAT organization. After retiring, he and his wife, Barbara, moved to Laurel, DE where he was an active member of Christ United Methodist Church until its closure. He took great pride in co-directing the Tuesday evening free soup social at Christ Church from September 2009 and continuing at Centenary United Methodist Church in Laurel through September 2019. Rich was a member of the Odd Fellows Charity Lodge #27 in Laurel. He enjoyed spending time with his friends, gardening, golfing, and cooking. He got the most satisfaction in dedicating his time to community service. Rich is survived by his loving wife, Barbara Foster Joseph; brothers, Robert Joseph (Diane), Ronald Joseph (Jaci); sons, Joel Joseph (Michelle), Bruce Joseph, Keith Joseph (Erica); daughters, Pam Pietro (Brian), Lisa Oliviera (Israel); step-daughter, Lee Ann Geist (Rich); and 8 grand children. In addition to his parents, he is preceded in death by his brother, Russell Joseph, Jr. and his first wife Linda. In lieu of flowers, memorial donations may be made in Mr. Joseph’s memory to the Friendly Sunshine Class of Centenary United Methodist Church, 200 West Market Street, Laurel, DE 19956 or the Odd Fellows Lodge #27, 319 Poplar Street, Laurel, Delaware 19956. A memorial service will be announced at a later date.

Richard Milton Joseph, age 79, of Laurel, DE, passed away on June 26th 2020 at Nanticoke Memorial Hospital in Seaford, DE, with his loving wife, Barbara, by his side. Born on February 5th 1941 in Johnstown, Pennsylvania, he is the son of the... View Obituary & Service Information

The family of Richard Milton Joseph created this Life Tributes page to make it easy to share your memories.

Send flowers to the Joseph family.