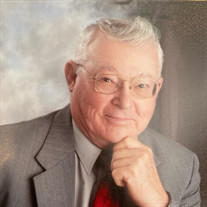 Richard "Dick" James, age 86, of Laurel, passed away on September 24, 2021 at TidalHealth Nanticoke in Seaford, Delaware. Born in Laurel, he is the son of the late Granville Omar James and Catherine LeCates James. Richard's career started at the two room Sycamore school and he moved to Laurel High School in the seventh grade. He would often tell the famous story about how he had to walk to school in the snow and still managed to be on time and a good student. As a junior, he won a national gold medal for judging dairy cattle in the FFA and was no longer able to compete. Still wishing to be in competition, he entered into public speaking and won first place in the state competitions in the FFA, 4-H, Grange, and Farm Bureau. This transformed a shy country boy and allowed him the confidence to become the twenty-fifth State President of the FFA and a National Delegate. Richard joined the National Guard and served 34 years. He worked on exercises with the Joint Chiefs of Staff at the Pentagon for 9 years and in exercises with CENTCOM and 3rd Army, Commanded Two Signal Brigades with 4,000 soldiers and retired with rank of Brigadier General. Richard was employed by Eastern States Coop, DuPont, and was a self-employed farmer. He was a member of the Grange, Farm Bureau, DE Retired Officers Association, and several others. He was a founding member, and founding board member of the Epworth Fellowship Church and served in most positions of service including teacher. Richard served Sussex County as a Tax Ditch Commissioner for over 25 years and as a manager of the Tyndall Tax Ditch. In retirement, he traced his family roots and founded the James of Sussex County Family Association Inc. a 1666 Colonial Family, non profit. Richard married June Warrington 63 years ago. He is survived by his loving wife June Warrington James; children, Janice Webb and her husband Jeff, Jay James and his wife Pam, Jed James and his wife Yuling, and Jo Adams and her husband Mike; 17 grandchildren and 6 great grandchildren; brother, Burton James and his wife Gail; sisters, Sylvia Mincy and her husband Bill and Hilda Davis. In addition to his parents, he is preceded in death by his brother Nelson James and brother-in-law William “Bill” Davis. A funeral service will be held at 12pm on Friday, October 1, 2021 at the Laurel Fire Department, 205 West 10th Street, Laurel, Delaware 19956. A viewing will be held from 11am-12pm. Reverend Harold Carmean and Reverend Richard Blades will officiate. Interment with military honors will follow in Odd Fellows Cemetery in Laurel. Contributions may be made in Mr. James memory to; the James Family Association, 25545 Chevrolet Ave. Seaford, Delaware 19973. Arrangements are in the care of the Hannigan, Short, Disharoon Funeral Home in Laurel, Delaware.

Richard "Dick" James, age 86, of Laurel, passed away on September 24, 2021 at TidalHealth Nanticoke in Seaford, Delaware. Born in Laurel, he is the son of the late Granville Omar James and Catherine LeCates James. Richard's career started at... View Obituary & Service Information

The family of Richard "Dick" Granville James created this Life Tributes page to make it easy to share your memories.

Richard &quot;Dick&quot; James, age 86, of Laurel, passed away on September...

Send flowers to the James family.