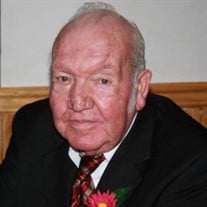 Bud was born Nov. 23, 1930 to the late Harrison Parsons and Miranda Johnson Parsons. He is preceded in death by all his natural siblings: brothers: James, Leelon, and Edward. If you asked Bud he would tell you he had two sisters which also preceded him in death; one died at birth and Ruth whom he knew as “Mom” because when Bud was two years old his mother died leaving him to be cared for by his older sister, Ruth, and her husband, Benjamin West. Ruth & Benjamin were blessed with two children of their own who became Bud’s siblings. A brother, Leroy West, (Ellen) who have both preceded Bud in death and a sister, Mary Ellen Evans and her deceased husband, Sonny. Bud was also preceded in death by a very special niece, Jean Calloway, who always watched out for her “Uncle Bud” Bud proudly served his country in the U.S. Army from 1951-1953. He began working at Southern States in 1956 and retired in 1986. After retiring he worked at Carey’s Garage from 1986-1989 as a gas attendant. Bud loved sports and could often be found at the local ball fields watching his nephews play. His favorite baseball team was the Baltimore Orioles. He also enjoyed the Shore Birds and spent many nights at Perdue Stadium cheering them on. In his younger years Bud played softball on the Trinity Church softball league. When asked who his favorite football team was he would say “ain’t got one, I watch whoever is playing.” Bud loved to bowl and bowled on a duck pin league in Chestertown, MD for many years. He also enjoyed going to the Osais Truck Stop just to “shoot the bull” as he would say. Bud knew everybody and will be missed by many, especially his children: daughters, Sue Davis (Donny), Nancy Buckle (Darry) and son, Ray Parsons (Cathy). He also leaves behind to cherish his memory four grandchildren: Stacy Thompson (David), Caren Hoerath (Stefan), Renea Thompson (Jeremy), Ray Parsons Jr. (Liz), and five great-grandchildren: Morgan & McKenna Thompson, Bastian Hoerath, Jaxson & Maddox Parsons and many nieces and nephews who lived nearby and looked out for him. All services will be held privately. Due to COVID-19 restrictions masks and social distancing will be required. In lieu of flowers, contributions may be made in Mr. Parson's honor to Delaware Hospice, 100 Patriots Way, Milford, Delaware 19963. Arrangements are in the care of the Hannigan, Short, Disharoon Funeral Home in Laurel, Delaware.

Bud was born Nov. 23, 1930 to the late Harrison Parsons and Miranda Johnson Parsons. He is preceded in death by all his natural siblings: brothers: James, Leelon, and Edward. If you asked Bud he would tell you he had two sisters which also preceded... View Obituary & Service Information

The family of Raymond "Bud" Parsons created this Life Tributes page to make it easy to share your memories.

Send flowers to the Parsons family.