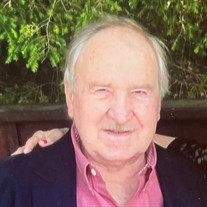 Per Sandvik, age 83, of Laurel, Delaware passed away March 12, 2022 in his home surrounded by his loving family. He is survived by his loving wife, Carla Sandvik and their children, Karin Elise, Leif Thor, Juli Kirstin, and Nicole Elizabeth along with his grandchildren, Lauren Ashley, Jonathan David, Lily Sophia, Emily Rose and Abigail Skye. Born in Stordahl, Norway on September 5, 1938, Per was the youngest child of Marius and Sigrid Sandvik née Husby. Per is survived by his sisters Sigrun Valstad, Astrid Bjørngaard, and Kari Hembre and many nieces, nephews, and extended family. He was predeceased by his other siblings Kolbjørn, Hjørdis, and Øistein. Per left Norway and joined the Merchant Marines and later, came to the United States of America as a young man and joined the United States Army where he served in the Military Police for several years. Per loved being an American citizen as much as he did his Norwegian heritage. After retiring from his career in dock building, he moved from Blairstown, New Jersey to Laurel, Delaware with his wife. As a very hardworking family man, Per instilled the same values into his children and grandchildren. He was the patriarchal glue that held us all together. Per had many hobbies which included photography, gardening, carpentry, hiking, camping, skiing, traveling with the love of his life, Carla, and eating her gourmet cooking. He was passionate about donating to charities that were important to him including St. Judes, Wounded Warrior Project, American Veterans organizations, and St. Joseph’s Indian School. There will be private services. In Lieu of flowers, donations may be made to one of the following: St. Jude's, Wounded Warrier Project, or the St. Joseph's Indian School. He never looked for praise, He was never one to boast, He just went on quietly working, For the ones he loved the most. His dreams were seldom spoken, His wants were very few, And most of the time his worries were unspoken too. He was there... a firm foundation, Through all our storms of life, A sturdy hand to hold on to, In times of stress or strife. ​ A true friend we could turn to, When times were good or bad, One of our greatest blessings, The man we called Dad. ​

Per Sandvik, age 83, of Laurel, Delaware passed away March 12, 2022 in his home surrounded by his loving family. He is survived by his loving wife, Carla Sandvik and their children, Karin Elise, Leif Thor, Juli Kirstin, and Nicole Elizabeth... View Obituary & Service Information

The family of Per Sandvik created this Life Tributes page to make it easy to share your memories.

Send flowers to the Sandvik family.