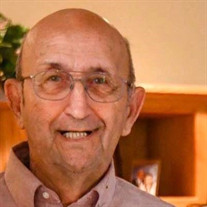 Norval E. "Shottie" Johnson, Jr., age 85, of Laurel passed away on January 29, 2020 peacefully at home surrounded by his loving family. Born in Laurel, on October 16, 1934, he is the son of the late Norval E. Johnson, Sr. and Dorothy H. Johnson. Shottie graduated from Laurel High School in 1952, upon graduation he wore many hats throughout his lifetime. He married his sweetheart, Shelby Shockley, July 3, 1954, and were happily married for over 65 years. Shottie had several employers early on, but will be remembered most as a poultry farmer, school bus contractor for over 30 years, and supervisor of building and grounds of the Laurel School District for 15 years. He enjoyed supporting, coaching, and playing baseball with Laurel Little League to men's softball leagues. He was an avid fan of Nascar, watching bull riding and western movies, and raising livestock. Most importantly, he was always present and involved in his son's, grandchildren's, and great-grandchildren's lives. He loved watching them participate in sports and being outdoors with his family the most. He is survived by his wife Shelby J. Johnson of Laurel; Children, Gregory N. Johnson (Carla) and Wade E. Johnson (Debbie) both of Laurel; Grandchildren, Lindsey Lee Smith (Scott) of Laurel, Nicole Renee Condon (Richie) of Delmar, Katie Lynn Litwhiler (Kevin) of Laurel, Ryan Wade Johnson and girlfriend Victoria Dunning of Laurel; Step-grandchildren Kyle Wesley Whaley and Kimberly Nicole Searcey (Ryan) both of Laurel; 11 great-grandchildren; and his sister-in-law Barbara Jenkins of Laurel. He was preceded in death by his parents. All services will be private. In lieu of flowers, contributions may be made in Shottie Johnson's memory to the Good Ole Boy Foundation, to help local families in need. Checks may be mailed to 36111 Pear Tree Road, Millsboro, DE 19966. Arrangements are in the care of the Hannigan, Short, Disharoon Funeral Home.

Norval E. "Shottie" Johnson, Jr., age 85, of Laurel passed away on January 29, 2020 peacefully at home surrounded by his loving family. Born in Laurel, on October 16, 1934, he is the son of the late Norval E. Johnson, Sr. and Dorothy H. Johnson.... View Obituary & Service Information

The family of Norval Shottie Johnson created this Life Tributes page to make it easy to share your memories.

Send flowers to the Johnson family.