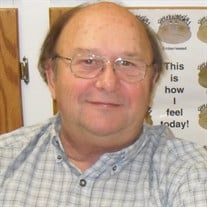 Milton (Mickey) Edgar Koster Jr. died on Friday April 6, 2018 at his home surrounded by his loving family and 3 furry companions. He was born on September 14, 1943 in Salisbury, Md, son of the late Milton Sr and Margaret Mumford Koster. He graduated from Laurel High School in 1963 where he ran track and played football, proudly wearing jersey #75. He also attended Massanutten Military Academy and Goldey Beacom College. Mickey was also a Scout with many funny stories occurring while he attended Scout Camp. He played on the shuffleboard team at The Laurel House restaurant and hotel which was owned by his parents. He was also a member of the National Guard where he was activated to Texas during Hurricane Hazel and also did riot control in the 60's. Mickey attended and was a member of Church of the Nazarene (Seaford) since 1974 where he took on various roles such as board member, VBS committee, trustee, steward, and lastly self appointed security guard. Mickey married the love of his life, Mary on November 6, 1975 and gained a ready made family which consisted of 4 daughters. During their 43 years as husband and wife they enjoyed trips to West Virginia, Florida, Nashville, camping at Janes Island, crabbing, going to local auctions, the Gospel Cafe and many other things. Mickey loved and always had multiple boats, had a passion for food (especially chicken and dumplings and oyster fritters), enjoyed hunting and fishing and was a member of the Nanticoke Sportsmans Club for years, going to the Old Mill, watching Marshall football team, going to the local gun shops, going to his grandkids, niece and nephews ball games, being a practical joker, and he was a huge Dale Earnhardt fan. Two trips that particularly was a highlight of Mickeys life was a trip to the Adobe Lodge for a deer hunt in Texas with his son in law and grandson (where he still cherishes the deer mount from that trip) and then attending the Kentucky Derby in 2001 with another son in law. He also followed his son in laws softball team (Quik Rail/ Service Glass) for many years going to local and away tournaments in Richmond and other places. He was a pit crew member for the 00 Woody Woodpecker race car driven by Jimmy Lambden which he loved! Later he drove a micro sprint car (#56) for Absher racing and then 2 of his grandsons followed in his footsteps racing using the #56 number as well. His greatest love was each time he had a new grandchild and then the great grandchildren as they arrived one by one. In his younger days Mickey was a lifeguard at Trap Pond and worked at DuPont. He was also the head meat cutter at Safeway grocery store. For a short time he also had his own trucking business, M E Koster Trucking. Mickey retired from Allen Family Foods as Transportation Supervisor. After retirement he enjoyed driving local school ball teams to their away games for Lambden busing. Mickey is survived by his wife Mary Roberts Koster, daughters Michelle Booth (Bob), Monique McGlannan (Joe), and Milinda Miller (Jeff), Grandchildren Angie Heck, Jon Absher (Sara), Dr. Phillip Dobson, Heather Walker (Bryan), Bobby LaMont (Liz), Jesse Davis (Jacqui), Robbie Booth (Alex), Billy Mellon, Tiffany Reed (Tyler), Bryan Miller and 9 great grandchildren Jack Dobson, Melissa Davis, Riley Absher, Lily Dobson, Owen Walker, Faith Absher, Mahayla Davis, Elie Booth, and Beth Reed, a sister Janan McElroy, nephew Ryan Walls and his children Dillon, Logan, Tate and Beck (and their mother Jessie) and niece Shanna Taylor and her children Blake and Liam. Mickey is also survived by a special brother and sister in law Bill and Marie LaMont and sister in law Naomi Bias. Mickey was predeceased by his parents Margaret and Milton Koster Sr, daughter Melissa Davis (Terry), granddaughter Tracey Booth Dobson (Phillip) and his favorite furry companion Chip whose ashes will be buried with Mickey. A celebration of life will be held in true Mickey fashion on Saturday April 14th at noon with viewing from 10-12 at Seaford Church of the Nazarene on Rt 13 just after Royal Farms and next door to the Guide. Officiating will be Pastor Judy Burnell, Larry Whaley, and Ray Justice. In lieu of flowers, donations can be made to Mickey's memorial fund in care of Seaford Church of the Nazarene, 25667 Faith Lane Seaford, DE 19973. We would like to invite you to join with us as we continue to celebrate the love and life of Mickey with a time of sharing food and fellowship at the Seaford Church of the Nazarene after burial at Odd Fellows Cemetery in Laurel DE following services

Milton (Mickey) Edgar Koster Jr. died on Friday April 6, 2018 at his home surrounded by his loving family and 3 furry companions. He was born on September 14, 1943 in Salisbury, Md, son of the late Milton Sr and Margaret Mumford Koster. He... View Obituary & Service Information

The family of Milton Mickey Koster Jr created this Life Tributes page to make it easy to share your memories.

Send flowers to the Koster family.