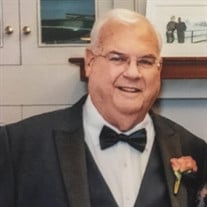 Michael V. Hughes, age 72, of Laurel, Delaware, passed away at his home on February 27, 2018. Michael was born in Baltimore City, son of the late Vincen (Josh), Jr. and Estelle R. Hughes, and was raised in Towson, Maryland. Michael was a proud graduate of the Baltimore Polytechnic Institute and obtained his Bachelor of Science degree in Chemical Engineering from the University of Delaware. He faithfully and honorably served his country in the U.S. Army during the Vietnam War. He moved to Delaware, working for the DuPont Company as a research and development chemical engineer, eventually becoming an independent industrial sales representative. He continued his military career by serving in the Delaware Army National Guard until his retirement from the Headquarters and Headquarters Company 261 Signal Command, Dover, DE, as a Lieutenant Colonel. Michael was an avid waterfowl hunter and a lifelong reader of the various histories and religions of the world. He loved spending time in his favorite chair at home, reading and researching with his world atlas, dictionary, and magnifying glass at his side. His greatest pleasure came from knowing that all of his family was able to gather together at home. He was a member of Portsville United Methodist Church in Laurel, DE. He is survived by his wife, Karen L. Hughes; a daughter, Courtney L. Hughes (Charles R. Conner III) of Baltimore, MD; a son, Patrick H. Hughes (Amy L.) of Dagsboro, DE; grandchildren, Kathryn R. and Allie L. Hughes; a sister, Patricia Rosso (Eugene) of Fallston, MD; and a mother-in-law, Jeannette A. Lynch of Selbyville, DE. A memorial service will be held at the Hannigan, Short, Disharoon Funeral Home, 700 West Street, Laurel, DE on Saturday, March 3, 2018 at 1:00 p.m. A private graveside service for family will follow. Pastor Bill Nack will officiate. In lieu of flowers, memorial contributions may be made to Portsville United Methodist Church, P.O. Box 187, Bethel, DE 19931.

Michael V. Hughes, age 72, of Laurel, Delaware, passed away at his home on February 27, 2018. Michael was born in Baltimore City, son of the late Vincen (Josh), Jr. and Estelle R. Hughes, and was raised in Towson, Maryland. Michael was a... View Obituary & Service Information

The family of Michael V Hughes created this Life Tributes page to make it easy to share your memories.

Send flowers to the Hughes family.