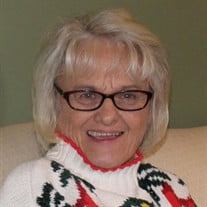 Mary Lou Dukes Pearson, of Seaford, Delaware went to be with her Lord and entered eternal rest on Friday, January 7th, 2022, surrounded by the love of her family and prayer. She was born on November 26th, 1949 in Milford, Delaware to the late Omar and Eleanor Dukes. Mary Lou was raised in Laurel, Delaware and worked at Arrow Safety Device Company, she later worked for Sears & Robuck Company. She married Wayne Dykes in 1969 and together they had their daughter Nicole. After leaving Sears & Robuck Company, she began her career at E. I. Dupont Company in Seaford; married David Pearson in 1979 and they raised together their four children. Mary Lou was devoted to her (kitty's) cats, spending time on the beach, their beach house in Chincoteague, flea markets, playing cards with her aunts and eating out after church with her late husband and mother. Never one to sit still, you could always find her busy into projects around the house and yard. She will be remembered for her Christmas spirit and love of the holidays, and hosting many family gatherings. Famous for the Christmas sweater and gifts that never matched the outside box!! She touched many lives with her generosity, deep faith and devotion to the Lord, love for family and community. She is survived by her sister, Margaret Holloway and her husband Bob, and their two girls, Beth and Bobbie; her daughter Nicole Dykes McCarra and her husband Derek, and the father of their daughter (Nicole), Wayne Dykes; son, David Andrew Pearson and his wife Lydia, daughter, Christy Pearson Jones and her husband Eric; and son, Matthew Paul Pearson and his wife Lucy; grandchildren, Kayla McCarra, Karly McCarra, Nathan McCarra, Angelyn Pearson and her husband John, Jacquelyn Pearson Sorey and her husband C.W., Ben Jones and his wife Jenn, Megan Jones Castrejon and her husband Gilberto, Connor Pearson, Kelly Pearson; great grandchildren, Jonah Casey and companion Francis Ireland. A visitation will be held on Saturday, January 15th, 2022 from 11am-12pm at the Hannigan, Short, Disharoon Funeral Home, 700 West Street, Laurel, DE 19956. A funeral service will begin at 12pm at the funeral home. Pastor Kyle Holloway will officiate. Interment will follow in Hollywood Cemetery in Harrington, Delaware. The family would like to express a sincere "Thank You" to TidalHealth P.R.M.C for the wonderful care given to Mary Lou. In lieu of flowers, the family suggests that contributions be made in Mary Lou Pearson's honor to; The Western Sussex Animal Hospital, 16487 Sussex Hwy. Bridgeville, Delaware 19933. Arrangements are in the care of the Hannigan, Short, Disharoon Funeral Home in Laurel, Delaware. We invite you to join us for Mary Lou Pearson's funeral services by visiting www.hsdfuneralhome.com and CLICK on Mary Lou Pearson's obituary, and then CLICK on Photos and Videos and you will see the screen for viewing, or click the link below. http://www.hsdfuneralhome.com/obituaries/permalink/10315400/LTWebcast

Mary Lou Dukes Pearson, of Seaford, Delaware went to be with her Lord and entered eternal rest on Friday, January 7th, 2022, surrounded by the love of her family and prayer. She was born on November 26th, 1949 in Milford, Delaware to the late... View Obituary & Service Information

The family of Mary Lou Pearson created this Life Tributes page to make it easy to share your memories.

Mary Lou Dukes Pearson, of Seaford, Delaware went to be with...

Send flowers to the Pearson family.