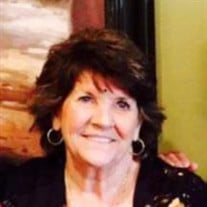 Marcia E. France, age 77, of Laurel, passed away on September 15, 2021 at TidalHealth Nanticoke in Seaford, Delaware. Born in Galax, Virginia, she is the daughter of the late Alfonzo Stone and Elletta Quillen Eichelburger. Marcia was a loving... View Obituary & Service Information

The family of Marcia E. France created this Life Tributes page to make it easy to share your memories.

Marcia E. France, age 77, of Laurel, passed away on September...

Send flowers to the France family.