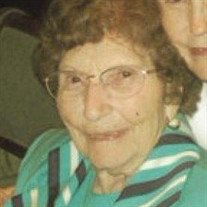 Lillie B. Brittingham, age 99, of Laurel, passed away on April 13, 2018 at the Paradise Senior Living in Georgetown, DE. Born in Laurel, she is the daughter of the late Ollie M. Baker and Winnie W. F. James. She graduated from Laurel High School’s class of 1935. Lillie was employed by Blue Ridge Manufacturing Company in Laurel for twenty years and served as the administrative assistant until retiring when the company closed its doors. She was later employed by the Farmers Bank of the State of Delaware which transitioned to Gerrard Bank and then transitioned to Mellon Bank where she worked an additional twenty years until her retirement in 1984. Lillie was a member of Centenary United Methodist Church and enjoyed attending and taking her children to Sunday school when they were young. She was a dedicated, loyal member of the church choir for over thirty years, enjoyed singing solos, and played the piano for the combined adult Sunday school classes for many years. She was treasurer of the Ladies Sunday School class until a stroke caused her to relinquish her duties in 2005. Lillie was a lifetime member of the Laurel Alumni Association and a charter member of the Laurel Redevelopment Corporation. She is survived by her daughter Jean B. Pearce Layton, of Milford, DE; son Larry C. Brittingham and his wife Linda of Fairfax, VA; brother Calvin S. Baker, of Delmar, MD; grandson Gregory J.Pearce and his wife Carol of Annapolis, MD; granddaughter-in-law Deborah J. Pearce of Waynesboro, VA; granddaughter Carmela M. Brittingham and her husband Joseph of Sterling, VA; grandson Dane C. Brittingham of Wilmington, NC; six great grandchildren: M. Alan Pearce and his wife Kirsten, J. Aaron Pearce and his wife Mia, J. Brandon Pearce and his wife Zoey, Jonathan E. Pearce, Meaghan V. Pearce, and Shannon B. Pearce; four step-great grandchildren; one step-great-great granddaughter, and Hattie Downing whom was a loyal,devoted friend to Ms. Lillie and her family for over twelve years. Several nieces, nephews, and cousins also survive her. In addition to her parents, she is preceded in death by her husband of over 65 years John “Jack” E. Brittingham; brother Reese M. Baker; infant brother Oliver Baker, grandson H. Alan Pearce; infant great grandson J. Matthew Pearce and son-in-law J. Floyd Layton. A funeral service will be held on Saturday, June 30, 2018 at 2:00 pm at Centenary United Methodist Church, 200 West Market Street, Laurel, DE. A visitation will be held at the church from 1:00 pm until 2:00 pm. Reverend Dean Perdue will officiate. Interment will follow in Odd Fellows Cemetery in Laurel. In lieu of flowers, contributions may be made in Mrs. Brittingham’s memory to: Centenary United Methodist Church, 200 West Market Street, Laurel, Delaware 19956. Arrangements are in the care of the Hannigan, Short, Disharoon Funeral Home in Laurel.

Lillie B. Brittingham, age 99, of Laurel, passed away on April 13, 2018 at the Paradise Senior Living in Georgetown, DE. Born in Laurel, she is the daughter of the late Ollie M. Baker and Winnie W. F. James. She graduated from Laurel High School&#8217;s... View Obituary & Service Information

The family of Lillie Brittingham created this Life Tributes page to make it easy to share your memories.

Lillie B. Brittingham, age 99, of Laurel, passed away on April...

Send flowers to the Brittingham family.