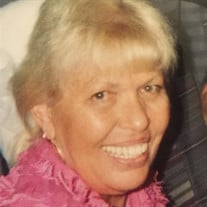 Leslie Jane Purnell Ritter Brown, of Delmar, Delaware passed away, surrounded by her loving family on November 15, 2017 at her home, after a battle with lung cancer. Born January 14, 1948, at John Hopkins Hospital, Baltimore, Maryland, the only child of George T. Purnell and Mary Elizabeth Cox Purnell. She graduated in 1966 from North East High School in Philadelphia, PA. After graduation she attended the Pierce Business School in Philadelphia. She also worked a short time in the Cosmetics Department at Benjamin’s in Salisbury, Maryland. Leslie was a past member of the Laurel Lioness Club, past member of the Delaware Board of Tourism, and a member of Centenary United Methodist Church in Laurel. She worked many years at THE SHORE’S LARGEST FLEA MARKET, an outdoor and indoor flea market structure and restaurant complex that her father and step-mother Helen M. Croke Purnell started in 1978, also known as Bargain Bill’s flea market. Upon her father’s death in 1988, she became the owner of the complex. It was sold in 2009. She considers her family her greatest pleasure and blessing and she had been so proud of their many achievements. She has been a caring, giving friend to many. Leslie loved the peninsula’s beaches from Ocean City to Rehoboth Beach, and had spent many hours on these beaches enjoying family and friends. Reading has always been a favorite activity. Leslie is survived by her husband of 42 years, William, Lenard Brown of Delmar, DE. She is also survived by her children, daughter Stephanie Ritter Ruddo and husband John of Berlin, William Purnell Brown and wife Christy of Delmar. Four grandchildren, Jonathan Chase Ruddo, Chloe Elizabeth Ruddo, Jordon Purnell Brown and Elizabeth Jane Brown, A Celebration of her life will be held at the Hannigan, Short, Disharoon Funeral Home 700 West Street, Laurel, DE 19956 on Saturday November 25, 2017 at 3:00 P.M. A visitation will also be held one hour prior to the service. The Rev. Howard Backus will officiate. Interment will be private.

Leslie Jane Purnell Ritter Brown, of Delmar, Delaware passed away, surrounded by her loving family on November 15, 2017 at her home, after a battle with lung cancer. Born January 14, 1948, at John Hopkins Hospital, Baltimore, Maryland, the only... View Obituary & Service Information

The family of Leslie Jane Brown created this Life Tributes page to make it easy to share your memories.

Send flowers to the Brown family.