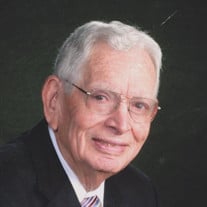 Leonard A. Hickman, age 89, of Laurel, went to be with the Lord on September 9, 2018. He was born on November 27, 1928, a son of the late Randall and Rebecca Hickman. Leonard graduated from Keller High School in Keller, Virginia in 1946 and continued his education at Beacom College. On September 10, 1949, he married the love of his life Ruth Hitchens Hickman. They were married for 67 years. After college, he went to work for the Burroughs Company as a salesman. On November 22, 1950 he joined the United States Navy and served his country during the Korean War until November 1952. In his spare time, he devoted himself to his family and to the community. He was a member of the Laurel Lions Club, where he was the chairman of the sight committee and received many humanitarian awards for his devotion to the community. He was also a member of the Laurel American Legion Post #19, Cambridge Elks Lodge 1272, and St. Philips Episcopal Church. In addition to his parents, Leonard was preceded in death by his wife Ruth H. Hickman, and his daughter Jill L. Hickman. He is survived by his grandson, Christopher M. Walls and his wife Marcy R. Walls, two great-grandchildren, Colby J. Pfleger (Heather), and Marissa M. Walls. He is also survived by two great-great granddaughters, Izabel and Rhen. A celebration of life will be held on Tuesday, September 18, 2018, at 11:00 am at St. Philips Episcopal Church, 600 S. Central Ave. Laurel, Delaware 19956. A visitation will be held from 10:00 am – 11:00 am at the church. The Reverend Dr. Howard Backus will officiate. Interment with military honors will be held at Odd Fellows Cemetery in Laurel. In lieu of flowers, memorial contributions may be made to Nanticoke Health Service Foundation, “In memory of the Jill L. Hickman Nursing Scholarship Program”, 801 Middleford Road, Seaford, Delaware 19973. Arrangements are in the care of the Hannigan, Short, Disharoon Funeral Home in Laurel, Delaware.

Leonard A. Hickman, age 89, of Laurel, went to be with the Lord on September 9, 2018. He was born on November 27, 1928, a son of the late Randall and Rebecca Hickman. Leonard graduated from Keller High School in Keller, Virginia in 1946 and... View Obituary & Service Information

The family of Leonard A. Hickman created this Life Tributes page to make it easy to share your memories.

Send flowers to the Hickman family.