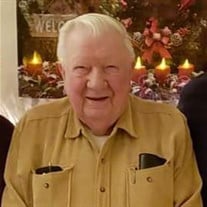 Lawrence Edwin Elliott “Cisco”, age 90, of Laurel, Delaware passed away at his home on July 21, 2019. Lawrence was born in Georgetown, Delaware a son of the late Benjamin T. Elliott and Bessie Adams Elliott. Lawrence retired with over 40 years of service as a PBX Installer for Diamond State Telephone, Delmarva Phone Company and Verizon. He was a devoted Fireman for the Laurel Volunteer Fire Department, where he served as past president and past chief. He was elected into the Fireman Hall of Fame with his 65 years of service. He was an active member of Asbury United Methodist Church in Seaford, past member of Laurel Civic Club and Laurel Lions Club. He loved the town of Laurel and could always be found in the Laurel parades with his 56 Chevy. He was also a member of the Telephone Pioneer Association. He enjoyed camping with his family. Lawrence is survived by his sons, Richard Elliott of Seaford, and Craig Elliott of Laurel. His granddaughter, Lisa Renee Elliott and great grandson, Tre’ M. Elliott. His honorary son, Terry Whaley (Sandy) of Laurel. Numerous nieces and nephews also survive him. Lawrence is preceded in death by his wife Eleanor Elliott in 2004. He is also preceded in death by Baby Madeline, Calhoun Elliott, William Elliott, Lena Short, Anna Scott, Marshall Elliott, Melvin Elliott and David Elliott. His companion Dorothy Rogers. His dog, Ella also preceded him. A viewing will be held at Asbury United Methodist Church 26146 Asbury Road Seaford, DE 19973 on Wednesday evening from 7-9:00 pm. A full fireman’s funeral will be held at the Hannigan, Short, Disharoon Funeral Home in Laurel, DE on Thursday July 25, 2019 at 12:00 pm, where a viewing will also be held from 11:00 am 12:00pm. The Rev. Kevin Wells will officiate. Interment will follow in Odd Fellows Cemetery in Laurel. Contributions can be made in Mr. Elliott’s memory to Asbury United Methodist Church or the Laurel Volunteer Fire Department 205 W. 10th Street Laurel, DE 19956.

Lawrence Edwin Elliott &#8220;Cisco&#8221;, age 90, of Laurel, Delaware passed away at his home on July 21, 2019. Lawrence was born in Georgetown, Delaware a son of the late Benjamin T. Elliott and Bessie Adams Elliott. Lawrence retired with... View Obituary & Service Information

The family of Lawrence E Elliott created this Life Tributes page to make it easy to share your memories.

Send flowers to the Elliott family.