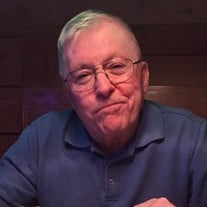 Lawrence “Larry” Drohan, Jr., age 81, of Laurel, and formerly of Jackson, New Jersey, passed away on July 12, 2018 at the Arbor Terrace in Manassas, Virginia. He was born and raised in Staten Island, New York, and was the son of the late Lawrence and Anne Drohan. Larry proudly served his country in the United States Air Force. During his time in the Air Force, he was stationed in northern California. Larry was retired from the JP Morgan Bank in Manhattan. Larry and his wife lived in Jackson, New Jersey for 15 years before retiring to Laurel, Delaware where he had lived for the last 20 years. He enjoyed traveling to the San Francisco area to visit his family any chance he could. Larry loved his family and his grandchildren very much, and in return his grandchildren thought he was a pretty amazing Pop Pop. He is survived by his daughter Patricia Healy and her husband Chad of Fairfax, Virginia. Two grandchildren; Madison and Ethan Healy; and his brother Donald Drohan of Parlin, New Jersey. Several nieces and nephews also survive him. In addition to his parents, Larry is preceded in death by his wife and the love of his life for 47 years Maureen Drohan. He is also preceded in death by his sister Carol Osgood and his brother John Drohan. A Funeral Mass will be held on Saturday, June 21, 2018 at 11:00 am at Our Lady of Lourdes Catholic Church, 532 E. Stein Hwy., Seaford, Delaware 19973. A viewing will be held on Friday evening, July 20, 2018 from 6-8 pm at the Hannigan, Short, Disharoon Funeral Home, 700 West Street, Laurel, DE 19956. Interment will follow in Our Lady of Lourdes Catholic Cemetery in Seaford. Contributions may be sent in Mr. Drohan’s memory to the American Cancer Society, P.O. Box 22478, Oklahoma City, OK 73123. Arrangements are in the care of the Hannigan, Short, Disharoon Funeral Home in Laurel, Delaware.

The family of Lawrence "Larry" Drohan Jr. created this Life Tributes page to make it easy to share your memories.

Send flowers to the Drohan family.