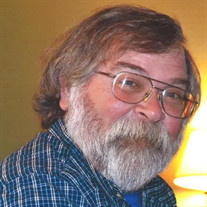 Kenneth E. “Dancing Bear” Tice, Sr. passed away on Friday, January 4, 2019 in Seaford. Born in Seaford on July 31, 1956, he was the son of Hershell G. Tice of Laurel and the late Patricia A. Wilson Tice. After high school, Ken, as he was best known by his family and friends, worked at several different jobs. He was a coal miner in West Virginia for several years and also managed the former Dillard’s Restaurant in Seaford. He was an accomplished HVAC Technician having worked for Peninsula Oil and with National HVAC, both of Seaford, for many years. For a period of time, he had also taught HVAC classes at Del Tech in Georgetown. He was also an accomplished Cake Decorator, Yo-Yo Man, Juggler, and Pinball Wizard. In addition to his father, Hershell, Mr. Tice is survived by a son Kenneth E. (Kristen) Tice Jr. of Newark; 2 adopted daughters – Cheryl (Philip) Haight and Rebecca Phillips, both of Seaford; 3 sisters - Patricia T. Green, Hurlock; Heather T. (Dave) Johnson, Harrington; and Amy L. (Huey) West, Bridgeville; 7 grandchildren - Katelyn & Kenny Tice III, Julianna & Nola Haight, Lukas & Tyler Morrison and Alexandra Phillips; several nieces and nephews are also surviving. A Celebration of Life Service will be held on Saturday, January 19, 2019 at 11 A.M. at the Bethel Worship Center at 26648 Sussex Highway Seaford, DE. A lifelong friend of Ken, Pastor Joe LeCates, will officiate. Visitation will be 1 hour prior to the service. Everyone is invited to come celebrate with the family to honor Ken’s life and his outgoing and friendly nature. The family asks that everyone come in casual dress wearing a plaid shirt, if possible, and be ready with their favorite joke or story. Memorial contributions may be made to the American Heart Association 200 Continental Drive Newark, DE 19713 or to the Alzheimer’s Association Sussex County 109 N. Bedford St. Georgetown, DE 19977. Online condolences may be made by visiting www.hsdfuneralhome.com. Arrangements are by Hannigan, Short, Disharoon Funeral Home, 700 West Street, Laurel, DE 19956 .

The family of Kenneth Dancing Bear Tice created this Life Tributes page to make it easy to share your memories.

Send flowers to the Tice family.