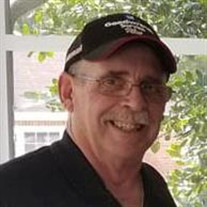 K. Barry Kennedy, age 62, of Laurel, passed away on October 9, 2019 at Nanticoke Memorial Hospital in Seaford, Delaware. Born in Seaford, he is the son of the late Carl Kennedy and Mary Massey Kennedy of Laurel. Barry was a delivery driver for Advanced Auto Parts in Georgetown, Delaware. He enjoyed surf fishing and going to the beach. His family was extremely important to him and he could be found supporting his grandchildren during all their extracurricular activities. His granddaughter Kenley will miss their weekly readings of the Sussex Guide and long talks. Barry loved the Lord and was a member of the First Baptist Church in Concord. He faithfully read his devotionals every day. Through his choice of being an organ donor, he was able to save the lives of many people and give them the “Gift of Life”. Barry is survived by his wife and the love of his life, Debbie Kennedy of Laurel; son SFC. Chad Joseph Bailey and his wife Ashley of Germany; daughters, Alison Christophel and her husband Kevin of Laurel and Kim Kennedy of Salisbury; grandchildren, Caleb Boyce, Colbie Boyce, Kenley Christophel, Abby Bailey and Alex Bailey. Several nieces and nephews also survive him. In addition to his father, Barry is preceded in death by his brother, Les Kennedy, who passed away on August 9, 2019. A funeral service will be held at 2:00 pm on Thursday, October 17, 2019 at the First Baptist Church of Seaford, 10016 Concord Road, Seaford, Delaware 19973. A viewing will be held at the church from 12:00 pm-2:00 pm. Pastor Barry Secrest will officiate. Interment will be held privately. Contributions may be made in Barry’s memory to: Gift of Life Donor Program, 401 N. 3rd Street, Philadelphia, PA 19123, or Children’s Heart Foundation, P.O. Box 244, Lincolnshire, IL 60069. Arrangements are in the care of the Hannigan, Short, Disharoon Funeral Home in Laurel, Delaware.

K. Barry Kennedy, age 62, of Laurel, passed away on October 9, 2019 at Nanticoke Memorial Hospital in Seaford, Delaware. Born in Seaford, he is the son of the late Carl Kennedy and Mary Massey Kennedy of Laurel. Barry was a delivery driver... View Obituary & Service Information

The family of K. Barry Kennedy created this Life Tributes page to make it easy to share your memories.

Send flowers to the Kennedy family.