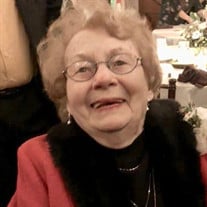 Juanita Evelyn Powell Stone, 97, died peacefully at home on July 9, 2019. She was born on March 27, 1922, in Clendenin, West Virginia, to Albert G. and Fannie Drake Powell. On December 2, 1941, Juanita married her high school sweetheart, Richard Lee Stone, a marriage that lasted 75 1/2 happy years. In addition to her husband Dick, Juanita was predeceased by her parents and a daughter, Deborah Lynn. Juanita is survived by her sister, Dormal Lavaughn Powell Jackson, of Covington, Virginia and Juanita's six children Sandra McWhirter, Gregory Stone (Moira), Stephen Stone (Brenda Gilio), Bonnie Fischer (James), Ellen Hearn (Ricky), and Richard Stone II (Cindi). Also surviving her are 11 grandchildren, Candace McWhirter, Christopher (Kit) Stone, Abigail Buppert, Vanessa Kassab, Staci Phillips, Cameron Fischer, Alison Millar, Jami Fischer, Heather Johnson, Ashley Hearn, and Eric Hearn. She also has nine great-grandchildren and many nieces and nephews. Juanita's love for her family and friends was unconditional. She loved baking and making clothes for her kids including prom and fall hop dresses. She was a friend to everyone and would do almost anything for a friend in need. She was also a volunteer and was active in many worthy organizations. Juanita and Dick's children were raised with love in their adopted town of Laurel, Delaware, a town they considered the perfect place to raise a family. Juanita’s enthusiasm for life extended to the organizations to which she belonged: Mt. Pleasant UMC and UMW; the Laurel New Century Club; the Foster Care Board; the Laurel Historical Society; and the Western Sussex County Democrats. A funeral service will be held at 2:00 pm on Sunday, July 21, 2019, at the Hannigan, Short, Disharoon Funeral Home, 700 West Street, Laurel, Delaware 19956. A viewing will be held from 1-2pm at the funeral home. Reverend Tim Dukes will officiate. Interment will follow in Odd Fellows Cemetery in Laurel. In lieu of flowers, donations can be made in Juanita's memory to: Mt. Pleasant UMC, c/o Shelly Givens, 8947 Woodland Ferry Road, Laurel, Delaware 19956 or Delaware Hospice, 100 Patriots Way, Milford, Delaware 19963. Online condolences may be sent to the family by visiting www.hsdfuneralhome.com Arrangements are in the care of the Hannigan, Short, Disharoon Funeral Home in Laurel.

The family of Juanita Evelyn Stone created this Life Tributes page to make it easy to share your memories.

Send flowers to the Stone family.