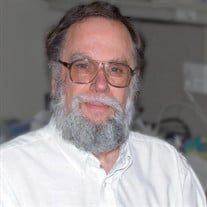 John Lucas (74) of Seaford, died unexpectedly Tuesday morning Jan.18, 2022. John was born on May 7, 1947 in Baltimore to Elizabeth Koch Lucas and John Aims Lucas. When he was two, the family moved to Ewing Township, NJ where he attended school and graduated in 1965. John graduated from Gettysburg College in June 1970 with a B.A. and departmental honors in Chemistry. In 1975 he graduated from Penn State University with an M.S. in Computer Science. He taught two weekend seminars and presented or participated in panel discussions in Record Management classes several times between 2001 and 2012 at Simmons College, Graduate School of Library and Information Science. John had a long and varied work career. He was employed as a polymer chemist at Thiokol Chemical Corporation; as a course developer, writer, instructional designer, electronic publishing consultant, electronic library consultant, and system analyst at Digital Equipment Corporation; as a system analyst and archivist at COMPAQ Computer Corporation; and as an IT system architect and Global Electronic Records Manager at Hewlett-Packard Company. John was a member of the American Chemical Society, the Association for Computing Machinery, the Americas SAP Users Group, and the Association of Record Managers and Administrators International. He retired on January 6th, 2012. He was also a Life Member of the American Association of Independent Investors, a member of the National Genealogical Society, the New England Historic Genealogical Society, and other local genealogical chapters. Among John’s many interests were gardening, science fiction and fantasy, genealogy, music, photography, and railroads (model and real). Perhaps his most significant personal accomplishment was as a founding member of the Global British Comedy Collaborative (GBCC), bringing together worldwide collectors of British radio comedy to trade recordings and discuss the shows. From 2001 until recently he was one of their most active members, maintaining the website and archives as well as recording current broadcasts of old and new programs. After living in Massachusetts for 40 years he moved to Manor House in Seaford, DE in 2016. There he held a genealogy class and helped other residents with family history. He acted as technology support for the Joy of Music program and at marketing events. He also provided many photographs of the campus and the actives. He was active in promoting the expansion of the Manor House fitness center. John is survived by his wife Elizabeth (Beth) Lucas, their daughter Stephanie Lucas, their son Alexander Lucas and his wife Renee DeBoard-Lucas, and grandchildren Nora and Calvin Lucas. A celebration of John’s life will be held on Sunday, February 13, 2022 at Hannigan, Short, Disharoon Funeral Home, 700 West Street, Laurel, DE 19956 at 2:00 pm. A visitation will be held at the funeral home from 1pm-2pm. Due to COVID-19 restrictions, masks and social distancing will be required. In lieu of flowers, donations may be made to Doctors Without Borders, The Smithsonian or to the charity of your choice. Arrangements are in the care of the Hannigan, Short, Disharoon Funeral Home in Laurel, Delaware. Please feel free to visit Mr. Lucas's obituary site to join us live on February 13th at 2:00 pm via livestreaming.

John Lucas (74) of Seaford, died unexpectedly Tuesday morning Jan.18, 2022. John was born on May 7, 1947 in Baltimore to Elizabeth Koch Lucas and John Aims Lucas. When he was two, the family moved to Ewing Township, NJ where he attended school... View Obituary & Service Information

The family of John Aims Lucas II created this Life Tributes page to make it easy to share your memories.

Send flowers to the Lucas family.