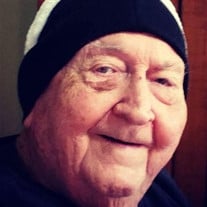 John T. Koch, age 87, of Laurel, passed away at his home on July 8, 2018, surrounded by his loving family. Born in Goldsboro, Maryland, he is the son of the late Robert Koch and Marie Kauper Koch. John was retired from the E.I. DuPont Company as a Laboratory Technician. He was a founding member of the Christ Lutheran Church in Seaford. He enjoyed gardening, growing beautiful flowers, fishing, and loved dogs; especially his K-9 companion “Cujoe”. John grew Christmas trees and enjoyed selling them during the holiday season. He was known for having a giving heart and he graciously blessed many families in need with a beautiful Christmas tree so they could enjoy a tree for the holiday season. He is survived by his daughter Carol Cordrey and her husband David of Laurel. His grandchildren; Cami Workman and her husband Jason, Katie McCreary and her husband James, Ricky Bailey and his wife Hope, Dennis Johnson, and John Johnson and his wife April. He is also survived by twelve great grandchildren and several extended family members. In addition to his parents, John is preceded in death by his wife Henrietta Rose Koch, his daughter Marian Vine, three great grandchildren, and his siblings; Harry Koch and Margaret Emerson. A funeral service will be held on Saturday, July 14, 2018 at 12:00 pm at the Hannigan, Short, Disharoon Funeral Home, 700 West Street Laurel, DE 19956. A viewing will be held at the funeral home from 11:00 am- 12:00 pm. Pastor David Nuss will officiate. Interment will follow in Odd Fellows Cemetery in Laurel. The Koch family would like to thank his friends and especially Lou Everline for helping with their Pop’s care over the last few years. They would also like to thank the staff at U.S. Renal, Prime Care, and Nanticoke Memorial Hospital for the excellent care and loving kindness they showed him over the years. Contributions may be made in Mr. Koch’s memory to the Christ Lutheran Church, 315 Shipley Street, Seaford, Delaware 19956. Arrangements are in the care of the Hannigan, Short, Disharoon Funeral Home in Laurel.

John T. Koch, age 87, of Laurel, passed away at his home on July 8, 2018, surrounded by his loving family. Born in Goldsboro, Maryland, he is the son of the late Robert Koch and Marie Kauper Koch. John was retired from the E.I. DuPont Company... View Obituary & Service Information

The family of John T. Koch created this Life Tributes page to make it easy to share your memories.

Send flowers to the Koch family.