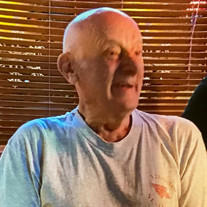 John Dulis, age 82, beloved husband, father, grandfather, uncle, friend, and Scout left this earth on November 14, 2021. He will truly be missed by his family, friends, and Scouting community. John was born on November 9, 1939, in Laurel to the late Filomena "Minnie" Thomas Dulis and Herman E. Dulis. John graduated from Laurel High School in 1959. He served honorably in the National Guard, while working for Playtex Company, then for DuPont in Seaford. John never missed a day of work and retired from DuPont as a power plant operator in 1994. Although working put food on the table, John's true passion was his family and service to others. John was a Scoutmaster of (Boy) Scouts of America Troop 90 in Laurel for many years. He led the troop on adventures including a 50-mile hike on the Appalachian Trail and a trek at the Philmont Scout Ranch in Cimmaron, New Mexico. John was a member of the Order of the Arrow and Silver Beaver Awards. After "retiring" as Scoutmaster, he continued in Scouting as a Campmaster for Camp Henson, hosting youth from Del-Mar-Va and around the world, teaching thousands of youth life skills and knot-tying over the years. In addition to his parents, John is preceded in death by his sister, Mary Collins Gibbons, and brother's Camillio (Angelo) Dulis, and Anthony (Tony) Dulis, and a grandson Christopher Dulis. Left to cherish his memory is the love of John's life and wife of 61 years, Anna Marie Dulis (nee Whaley); daughter Susan Duran (Tim); sons, Jeffrey Dulis (Marlene), and Jerold Dulis (Cathy). John won a contest at his class reunion by having the most grandchildren and great-grandchildren. In order of birth; grandchildren, Kristen Duran See, (Lil) Jerold Dulis, Toni Tiritilli, Jeremy Dulis, Johnny Dulis, David Lord, Tanner Tiritilli, Jacob Dulis, George Dulis, Madison Dulis, Michael Dulis, Scarlett Duran, Miguel Duran, and William Dulis; great grandchildren, Bella Dulis, Layla Lord, Cole See, Gabriella Dulis, Oaklyn Lord, and many nieces and nephews. A visitation will be held at the Hannigan, Short, Disharoon Funeral Home, 700 West Street, Laurel, Delaware 19956 on Tuesday, November 23, 2021 from 11am-12pm. A funeral celebration of life will follow at 12pm. Reverend Fred Duncan will officiate. Interment will follow in Our Lady of Lourdes Catholic Cemetery in Blades. Arrangements are in the care of the Hannigan, Short, Disharoon Funeral Home in Laurel, DE.

John Dulis, age 82, beloved husband, father, grandfather, uncle, friend, and Scout left this earth on November 14, 2021. He will truly be missed by his family, friends, and Scouting community. John was born on November 9, 1939, in Laurel to... View Obituary & Service Information

The family of John Dulis created this Life Tributes page to make it easy to share your memories.

Send flowers to the Dulis family.