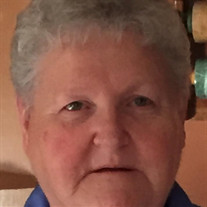 JoAnne Lee Layton of Laurel went to be with the Lord on Saturday, January 30, 2022 at Genesis Seaford Center in Seaford. Born on September 1, 1947, she was the daughter to the late Roland and Grace Elizabeth Hughes of Laurel. She was one of their thirteen children. JoAnne began her career working as a nurse's aid in the mid- 80's at Nanticoke Memorial Hospital, caring for babies in the nursery ward. She went on to work at Genesis Seaford Center in September of 1990 and worked as a Geriatric Nursing Assistant Specialist for over 25 years. JoAnne was a very hard-working Christian woman who dedicated her life to serving others. It didn't matter whether they were patients, family, or friends, she always did her best to give great care, love, and support to anyone in need. Family was very important to JoAnne. Raising four children of her own and later watching over and caring for her many grandchildren as they grew up, brought her great pride and joy. She will be very deeply missed. In addition to her parents, she is preceded in death by her ex-husband George R. Layton Sr., to whom she was married to for over 22 years; her infant son, Blair Allen Layton; her brothers, Ronald Hughes, David Hughes, and Kenneth Hughes; and her sister, Pat Robert. She is survived by her six brothers and a sister; Roland Hughes (Loretta) of Greenwood, Rubin Hughes (Sharon) of Harrington, Charlie Hughes of Harrington, Dennis M. Hughes (Remona) of Harrington, Elwood Lord (Beverly) of Dover, George Hughes (Shirley) of Laurel, Mary Ann Branham (John) of West Virginia, her children; George R. Layton Jr. of Laurel, Donnie L. Layton of Galestown, MD, Jerry L. Layton (Michelle) of Bridgeville, Melody A. Hayman (Bobby Sterling) of Crisfield, MD; grandchildren, Chad K. Layton, Dakota R. Layton, Rhemy H. Layton, Sarah J. Layton, Shawn C. Layton, Damian E. Bullock, and Desteny M. Hayman; great grandchild, Blair E. Bullock, and many extended family and friends. A visitation will be held from 9:30am-10:30am on Saturday, February 12, 2022 at the Hannigan, Short, Disharoon Funeral Home 700 West Street, Laurel, DE 19956. A funeral service will begin at 10:30 am at the funeral home. Pastor Joe LeCates will officiate. Interment will follow in Odd Fellows Cemetery in Laurel. Condolences may be sent to the family by visiting www.hsdfuneralhome.com. Arrangements are in the care of the Hannigan, Short, Disharoon Funeral Home in Laurel, Delaware.

JoAnne Lee Layton of Laurel went to be with the Lord on Saturday, January 30, 2022 at Genesis Seaford Center in Seaford. Born on September 1, 1947, she was the daughter to the late Roland and Grace Elizabeth Hughes of Laurel. She was one of... View Obituary & Service Information

The family of JoAnne Lee Layton created this Life Tributes page to make it easy to share your memories.

JoAnne Lee Layton of Laurel went to be with the Lord on Saturday,...

Send flowers to the Layton family.