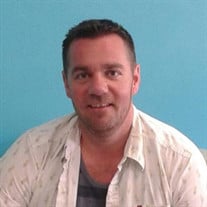 Jesse Lee Styers, age 39, of Corinth, Mississippi and formerly of Georgetown, Delaware went home to be with his savior on November 1, 2018. He passed away at his mother’s home in Laurel. Born in Milford, he is the son of Conrad L. Styers of Georgetown and Lora Taylor-Hastings and his step-father Mark Hastings of Laurel. In his youth, he had attended Epworth Christian School and graduated from Sussex Tech Highschool class of "1997". He was a very active member of Pinecrest Baptist Church in Corinth, Mississippi. Jesse was a talented builder and contractor. His laugh was infectious and his personality was magnetic. Jesse was always polite and mannerly and he had a tremendous gift for human compassion. He greatly enjoyed attending Victory Tabernacle Church with his family. In addition to his parents, Jesse is survived by his brother Luke Styers and his wife Melissa. His step-sister Erin Gabbert and her husband Kyle; paternal grandmother Ada Brinker; nieces and nephews, Allyson, Kaela, and Cade Styers; step-niece Brianna Gabbert; aunts and uncles, Chip Cole and his wife Debbie, Larry Brinker and his wife Dawn, Gene Taylor and Rhonda, Tom Taylor and his wife June, Sally Bradshaw and her husband Glenn, and Beth Taylor. Numerous cousins also survive him. Jesse is preceded in death by his grandparents; Donna Taylor, Gene Taylor, and Henry Styers. He is also preceded in death by his cousin Jessica Taylor. A viewing will be held on Saturday, November 10, 2018 from 10:00 am- 12:00 pm at Victory Tabernacle Church, 28261 Seaford Road, Laurel, DE 19956. A funeral service will be held at the church at 12:00 pm. Pastor Stacey Johnson will officiate. Interment will follow in Epworth Cemetery in Laurel. To help defray funeral costs, donations may be made in Jesse’s honor to his family, and “Go Fund Me” page is also available. Arrangements are in the care of the Hannigan, Short, Disharoon Funeral Home in Laurel.

Jesse Lee Styers, age 39, of Corinth, Mississippi and formerly of Georgetown, Delaware went home to be with his savior on November 1, 2018. He passed away at his mother&#8217;s home in Laurel. Born in Milford, he is the son of Conrad L. Styers... View Obituary & Service Information

The family of Jesse Lee Styers created this Life Tributes page to make it easy to share your memories.

Send flowers to the Styers family.