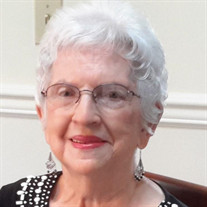 Jean P. Hurlock, age 86, of Sharptown, passed away at Coastal Hospice at the Lake in Salisbury, MD, on July 15, 2018. Jean was born in Philadelphia, PA a daughter of the late James Kelly and Ruth Kelly Quillen, and Step-Daughter of the late G. Preston Quillen of Berlin MD. Jean attended Catholic School in Philadelphia and moved with her mother and siblings to the Berlin area when she was seventeen. She was married to Walter J Dennis and had one son, Michael D. Dennis, to whom she was devoted. She worked at various jobs in the Berlin-Ocean City area. Later Jean was married to David Hurlock and they moved to Seaford DE where she worked at the Peebles Dept Store for eleven years as a Sales Person. Her Catholic faith was very important to her and she and David attended Our Lady of Lourdes Catholic Church in Seaford DE. She loved music, singing and dancing and attended the "Happy Timers" group in Wicomico County as often as she could. She also was an avid Shorebirds baseball fan and enjoyed needlepoint and sewing. She is survived by two sisters, Patricia Burbage, Ruth Hastings and her husband Carroll, all of Salisbury; and numerous nieces and nephews who fondly remember their "Aunt Jean." In addition to her parents she is preceded in death by her brothers, Joseph J. Kelly in 1991 and James F. Kelly in 2006, her husband David Hurlock in 2012, and her only child and devoted son, Michael D. Dennis in 2015. A mass of Christian Burial will be held at St. Frances de Sales Catholic Church, 535 Riverside Drive, Salisbury MD 21801 on Friday July 20, 2018 at 11:00 am, with a Visitation/Viewing held one hour prior to the service. A luncheon will immediately follow the service in the Church Hall. Interment will be held in Our Lady of Lourdes Cemetery in Seaford DE at 2:30 PM. In lieu of flowers, the family requests that contributions be made to Coastal Hospice at the Lake, PO Box 1733, Salisbury MD 21802. Arrangements are in the care of the Hannigan, Short, Disharoon Funeral Home Laurel, DE.

Jean P. Hurlock, age 86, of Sharptown, passed away at Coastal Hospice at the Lake in Salisbury, MD, on July 15, 2018. Jean was born in Philadelphia, PA a daughter of the late James Kelly and Ruth Kelly Quillen, and Step-Daughter of the late... View Obituary & Service Information

The family of Jean P. Hurlock created this Life Tributes page to make it easy to share your memories.

Jean P. Hurlock, age 86, of Sharptown, passed away at Coastal...

Send flowers to the Hurlock family.