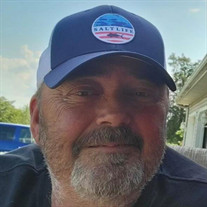 Jason Burhop, age 51, of Bridgeville, and formerly of Mt. Jackson, Virginia, passed away on August 18, 2021 at his home surrounded by his loving family. He was born on September 30, 1969, in Milwaukee, Wisconsin. Jason served his country in the United States Army and proudly served in the Honor Guard "Old Guard" . Jason was proud to serve as a sergeant at the Delaware Department of Corrections. His hobbies included, riding his motorcycle, surf fishing, working in his vegetable garden, farming with his girls, and sitting around the firepit on the farm with his family and friends. Jason was a devoted husband, father, and friend. His friends and family were his most important treasure. He is preceded in death by his father Kenneth Burhop, and his step father whom raised him, Mervin Dawson. He is survived by his mother, Kathleen Cornwell Burhop of Broadway, Virginia. Jason is also survived by his loving wife of 25 years, Amy Baiocco Burhop; daughters, Danielle Burhop (22), and Alyssa Burhop (20) all of Bridgeville; brother, Clinton Burhop of Broadway, Virginia; mother in law, Marianne Baiocco of Laurel; sister in law, Dena Evelo and her husband Eric of Quantico, Maryland; nieces, Emily Evelo, and Abigail Evelo, and his nephew, Christian Burhop. The Burhop family invites family and friend to attend an Open House "Celebration of Life" on Saturday, August 28th, 2021, from 2:00 pm-6:00 pm at Burhop Acres. In lieu of flowers, the family requests that contributions be made in Jason Burhop's memory to the American Cancer Society,P.O. Box 22478, Oklahoma City, OK 73123 or Compassionate Care Hospice, 20165 Office Circle, Georgetown, DE 19947. Arrangements are in the care of the Hannigan, Short, Disharoon Funeral Home in Laurel, Delaware.

Jason Burhop, age 51, of Bridgeville, and formerly of Mt. Jackson, Virginia, passed away on August 18, 2021 at his home surrounded by his loving family. He was born on September 30, 1969, in Milwaukee, Wisconsin. Jason served his country in... View Obituary & Service Information

The family of Jason Burhop created this Life Tributes page to make it easy to share your memories.

Jason Burhop, age 51, of Bridgeville, and formerly of Mt. Jackson,...

Send flowers to the Burhop family.