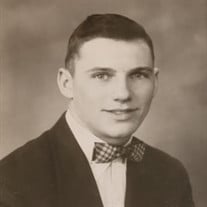 Howard Fulton Neal, a.k.a.; "Harley", age 88, of Laurel, passed away on September 5, 2021 at TidalHealth Nanticoke in Seaford. Born on November 8, 1932, he is the son of the late Harley and Margaret Neal. Howard graduated from Laurel High School in 1952, where he played football as a fullback for the "Bulldogs". After graduation, he began working at the E.I. DuPont Company, then moved to C.C. Oliphant, until he owned and operated his own HVAC company. After retiring from the heating and air industry, he enjoyed doing general repair work and painting with his father. He was a lifetime member of the American Legion Post #19, where he enjoyed playing card with his friends. He loved fishing and will be remembered by his nieces and nephews for treating them for ice cream at the Tastee Freez after a great day of fishing. He is survived by his brother, James Neal and his wife Barbara of North Carolina; his doting nieces and nephew, Sandra Shipe and her husband Bob of Lewes, Susan Zwerling of Virginia, Lisa Lester and her husband Ken of Texas, Kate Guynn and her husband Tony of Texas, and Tim Neal and his wife Colleen of Texas; several great nieces, nephews, and cousins also survive him. In addition to his parents, he is preceded in death by his sister, Jean Conaway and his brother in law, Miles Conaway, Sr.; baby brother, Elmer Neal; niece, JoAnn Hammonds; and nephew, Miles Conaway, Jr. All services will be held at a later date. Arrangements are in the care of the Hannigan, Short, Disharoon Funeral Home in Laurel, Delaware.

Howard Fulton Neal, a.k.a.; "Harley", age 88, of Laurel, passed away on September 5, 2021 at TidalHealth Nanticoke in Seaford. Born on November 8, 1932, he is the son of the late Harley and Margaret Neal. Howard graduated from Laurel High School... View Obituary & Service Information

The family of Howard "Harley" Neal created this Life Tributes page to make it easy to share your memories.

Send flowers to the Neal family.