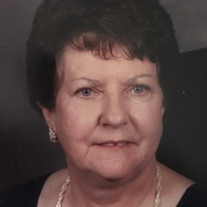 Geraldine S. Evans, age 88, Laurel, Delaware passed away at home on September 9, 2019 at her home. Geraldine, a.k.a. “Jerri” as she was known by many, was born in April 26, 1931 at McCready Hospital in Crisfield, MD. She grew up on Rhodes Point, Smith Island and was the daughter of the late Maurice W. Sneade and Lena Marsh Sneade. Geraldine graduated from Crisfield High School in the class of 1948. After graduation, she became employed in the Maryland Comptrollers office in Annapolis and was employed by the State of Maryland for 20 years. She was the secretary to the Director of Budget Review in the office of Legislature at the time of her retirement. Geraldine married the late Glenwood Evans in 1956 and they made their home in Annapolis, Maryland, where their two children were born. They later relocated to Columbus, Ohio where her husband was employed by Nationwide Insurance. Geraldine loved her husband and family dearly. She enjoyed the many dinners and get togethers she had with family and friends. She and her family were always involved in church activities where they lived. Geraldine taught Sunday school, served in many choirs, and was active in the UMW. Upon retirement on the Eastern Shore, they made their home in Laurel. She was a member of Centenary United Methodist Church, and when she was unable to attend she would enjoy watching Christian television. Geraldine enjoyed working in the yard, growing and planting many beautiful flowers, and watching the birds. Geraldine is survived by her children, Cathy E. LaMaster of Smith Island, and Glenn Evans of Laurel. Her grandchildren, Amanda LaMasters, Heather Roberts, Joshua Evans and Zachary Evans. In addition to her parents, she is preceded in death by her husband Glenwood Evans. A funeral service will be held at Centenary United Methodist Church, 200 West Market Street, Laurel, Delaware on Friday, September 13, 2019 at 2:00 pm. A viewing will also be held at the church from 12-2:00 pm. The Reverend Dean Perdue will officiate. Interment will follow in Odd Fellows Cemetery in Laurel. Arrangements are in the care of the Hannigan, Short, Disharoon Funeral Home in Laurel, DE.

The family of Geraldine Evans created this Life Tributes page to make it easy to share your memories.

Send flowers to the Evans family.