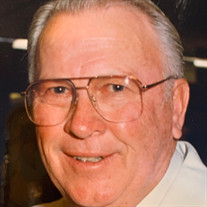 George Jacob Collins, age 89, passed away peacefully after a brief illness on Saturday, December 14, 2019 at his home in Laurel, Delaware. George was born March 5, 1930 on the family farm near Portsville to his parents Rubert and Nettie Collins. He is survived by his wife of 62 years, Marlene Collins, his son, Mark Collins (Dawn Collins), his daughter, Karen Coleman (Matthew Coleman), 5 grandchildren; Quinn Coleman (Katie Coleman), Brooke Robinson (Neil Robinson), Kelsey Collins Lloyd (Chad Lloyd), Jenna Munoz, and Zachary Collins. He was a great grandfather to Ashton, Karson and Curren. In addition to his parents, George was preceded in death by 4 sisters; Betty Marine, Irene Outten, Helen Mae Bennett, Fannie Hastings and 2 brothers; Ward Collins, and Herbert Collins. George was a graduate of Laurel High School Class 1949. Growing up on a farm, he pursued his love of agriculture until his retirement in 1990. In the fall of 1990 he was elected to the Sussex County Council and served 2 terms. His son, Mark, took over the farming operation which they had partnered for 10 years. George was a member of Mt. Pleasant Church where he served as chairman of the Administrative Board for many years. In addition to his service at his church, he was also active in several civic and farm organizations, including, Mar-Del Watermelon Association where he served as President and an Executive Council Member. He was also a charter member, past director and past President of the Laurel Ruritan Club. As a member of the Southern Delaware Truck Growers Association (Block), he was a past Director and past President. Additionally, he was a past Director for the Laurel Grain Company and a member of the Farm Bureau. George also had the pleasure of being a past President of the Advisory Council at the University of Delaware Research and Education Center in Georgetown. In 1991 George, along with his son, were given the Master Farmer Award by the Pennsylvania Farmer and University of Delaware Cooperative Extension for high achievement in farming and public service. In 1997 he was honored to receive the Service to Agriculture Award presented by the University of Delaware College of Agriculture Sciences. During his retirement he and his wife traveled throughout the world. They enjoyed traveling to Ireland, England, Scotland, Russia, China and Australia to name just a few countries. Upon returning to his beloved farm, he would always comment that home was his favorite place in the world. A visitation will be held on December 17, 2019 at the Hannigan, Short, Disharoon Funeral Home, 700 West Street, Laurel, Delaware from 6:00 pm-8:00 pm. A funeral service will be held at Mt. Pleasant United Methodist Church, Mt. Pleasant Road, Laurel, Delaware on Wednesday, December 18, 2019 at 12:00 pm. A visitation will be held from 11:00 am until 12:00 pm at the church. Interment will follow in Mt. Pleasant Church Cemetery. In lieu of flowers, the family request memorial donations to Mt. Pleasant Church, C/O Shelley Givens, 8947 Woodland Ferry Road, Laurel, Delaware 19956 or the Mt. Pleasant Cemetery Fund, C/O Trudy Jones, 8547 Sharptown Road, Laurel, Delaware 19956. Arrangements are in the care of the Hannigan, Short, Disharoon Funeral Home in Laurel, DE.

George Jacob Collins, age 89, passed away peacefully after a brief illness on Saturday, December 14, 2019 at his home in Laurel, Delaware. George was born March 5, 1930 on the family farm near Portsville to his parents Rubert and Nettie Collins.... View Obituary & Service Information

The family of George Jacob Collins created this Life Tributes page to make it easy to share your memories.

George Jacob Collins, age 89, passed away peacefully after a...

Send flowers to the Collins family.