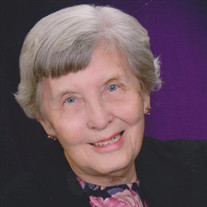 Freda M. Prothe, age 84, of Seaford, passed away at her home on September 1, 2018. Born in Ironton, Ohio, she is the daughter of the late Stirl Thomas Johnson, Sr. and Lulie Sprouse Meyers. Freda was retired from Fuqua, Yori, and Rogers Law... View Obituary & Service Information

The family of Freda M Prothe created this Life Tributes page to make it easy to share your memories.

Send flowers to the Prothe family.