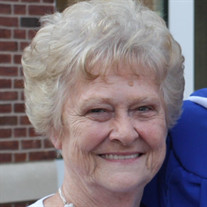 Faye L. (Hitch) Littleton passed away November 12, 2017. Born July 5, 1942 in Salisbury, MD, Mrs. Littleton worked at Delmarva Power and Light and later at Carey’s Towing, as an office manager before retiring in 1985. She was a member of the Laurel Nazarene Church where she loved her church family, especially the children who knew Ms. Faye always had candy for them. She was a member of the Red Hat Society and loved playing cards and dominoes with her friends and family. Mrs. Littleton was a dedicated and loving mother and a doting grandmother. Mrs. Littleton is survived by her three children, Mark Hitch (Joelle), Kathy Hitch Kunkowski (Brian), and Michael Littleton (Annie), and five grandchildren, Heather Spicer, Scott Kunkowski, and Corey, Jordan, and Jaycie Hitch. She is also survived by her brother and sister-in-law, Sheldon and Sara Belle Larmore of Salisbury, MD as well as her step-children, Ed Littleton (Linda), Rita Powell (Don), Joann Blades (Dick), and Dixie Baker. She was preceded in death by her parents, Talbot Larmore, and Lillian Green Larmore Hope and her step-father William Hope. She was also preceded in death by her first husband, Thomas Eugene Hitch, her husband Wm. Lee Littleton. In lieu of flowers, the family suggests donations to the David Larmore Memorial Fund, an organization named in the memory of a beloved nephew that supports and aids handicapped children. (David Larmore Memorial Fund c/o Community Foundation of the Easter Shore, 1324 Belmont Ave., Ste. 401, Salisbury, MD 21804.) Visitation will be held on Friday, November 17, 2017 from 6 to 8 pm at Hannigan-Short-Disharoon Funeral Home, 700 West Street, Laurel, DE. A service celebrating her life and her homecoming with her Lord will be held at the Laurel Nazarene Church, 100 Walnut Drive, Laurel, DE on Saturday, November 18, 2017, at 11 am. A visitation will also be held at the church from 10am to 11am. The interment will follow at Odd Fellows Cemetery in Laurel. Online condolences can be made to the family by visiting, www.hsdfuneralhome.com.

Faye L. (Hitch) Littleton passed away November 12, 2017. Born July 5, 1942 in Salisbury, MD, Mrs. Littleton worked at Delmarva Power and Light and later at Carey&#8217;s Towing, as an office manager before retiring in 1985. She was a member... View Obituary & Service Information

The family of Faye Hitch Littleton created this Life Tributes page to make it easy to share your memories.

Send flowers to the Littleton family.