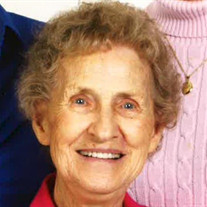 Etta Lavinia Abbott Hastings, age 94, passed away on June 5, 2018 at her home. Born in Sewards, Maryland, she was one of thirteen children born to Clarence J. and Lola L. Hoffman Abbott. Being the daughter of a minister, Etta attended several schools on the Eastern and Western shores of Delmarva where her father served as pastor. She graduated from Seaford High School in 1941. She was married to Thomas Rudolph Hastings on December 1, 1943. Her husband passed away in 1980. Mrs. Hastings was mainly a homemaker all her life, but was employed at various occupations. She worked for the Farmer's Home Administration, McDonalds's, Soroptimist Thrift Shop and a local antique shop. She held a notary public's license for many years. After completing a course from IBM, she was a tax preparer for many individuals. Etta enjoyed her flowers, scrapbooking and especially being with her family. She also enjoyed traveling. She, with her husband, Rudolph, and children, toured the United States extensively. She has also traveled to Canada, Mexico, Cayman Islands, Puerto Rico, London, and Jerusalem. Her most enjoyable pastime, however, was her music. She sang and played the piano in church all her life and could also play the accordion and autoharp, often doing so for shut-ins and in local nursing homes. Mrs. Hastings resided in Lofland Life Care for a time and even though her health was failing, she would play the piano occasionally there, as well. Mrs. Hastings was a devout Christian and a faithful member of Victory Tabernacle Church of God. She shared her faith with others and enjoyed telling of God's faithfulness, of the miracles she had experienced growing up in the home of a dedicated minister of the Gospel and of her own Pentecostal experience. Losing two young children to cystic fibrosis was a heart-breaking experience for Etta, but her faith sustained her through many difficult times. Etta was a devoted wife, mother, grandmother, great-grandmother and friend. She was a loveable person and all who knew her enjoyed being in her company. She had a fun, mischievous side and enjoyed having a good time. Etta is survived by three brothers: Sam (Shirley) Abbott of Cleveland, TN; William (Jan) Abbott of Atlantic, VA; and David Abbott of Phoenix, AZ. She is also survived by her children: her daughter, Donna Mills and husband, Tony, of Georgetown; son, Dwight Hastings of Hebron, MD; daughter, Cheryl Crowe and husband, Ray, of Hixson, TN. Grandchildren: Laura (Mike) Montague; Maxine (Kendall) Matthews; Anthony (Diane) Mills; Thomas (Jordyn) Crowe. Great-grandchildren: Caleb and Connor Montague; Grace and Sam Matthews; Julia and Carter Mills. Mrs. Hastings is also survived by many nieces and nephews. In addition to her parents and husband, Etta is preceded in death by her three sons: Delbert, Tommy and Dwight (1); by sisters: Elizabeth Bowden Tull, Emily Cook, Delma Bowden and Norma Caldwell; brothers: Clarence Abbott, Jr., Emerson Abbott, Fred Abbott, Lloyd Abbott and infant brother, David Abbott. Etta will be greatly missed by her family, many family friends, and extended family members. She is safe in the arms of her Loving Saviour and Heaven is sweeter with her there. A viewing was held at the Hannigan, Short, Disharoon Funeral Home, 700 West Street, Laurel, Delaware on Saturday, June 9, 2018 from 6 pm until 8 pm. The funeral service was held at the Victory Tabernacle Church of God, 28261 Seaford Road, Laurel, DE on Sunday, June 10, 2018 at 3 pm. A viewing was held on Sunday one hour prior to the funeral service at the church. Interment followed in Odd Fellows Cemetery in Laurel. Contributions may be made in Mrs. Hastings memory to Delmarva Teen Challenge in Seaford, Delaware. Pallbearers were Dwight Hastings, Tony Mills, Ray Crowe, Anthony Mills, Thomas Crowe and Tom Clarke. Honorary pallbearer was William Abbott.

Etta Lavinia Abbott Hastings, age 94, passed away on June 5, 2018 at her home. Born in Sewards, Maryland, she was one of thirteen children born to Clarence J. and Lola L. Hoffman Abbott. Being the daughter of a minister, Etta attended... View Obituary & Service Information

The family of Etta Lavinia Abbott Hastings created this Life Tributes page to make it easy to share your memories.