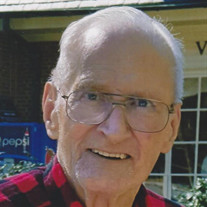 Eschol J. Mariner, age 88, of Laurel, passed away peacefully at home on Saturday, July 6, 2019 surrounded by his loving family. Born in Laurel, he is the son of the late Eschol M. Mariner and Nellie M. Wootten Mariner. Eschol graduated from Laurel High School in the class of 1949. Soon after graduation, he tried out for the Philadelphia Phillies, but instead of baseball he chose the love of his life, Effie Mae Wootten, and they were married for almost 45 years until she passed away in 1995. He was fortunate enough to experience love a second time and has been with his loving partner, Barbara Berkeley for the past 22 years. Eschol retired from Dupont after 42 years and also farmed on the side. After retirement, he was able to spend his time traveling and enjoying life. He was very involved as a father and grandfather. Even though the Phillies and the Eagles had his heart, he had a passion for coaching Little League Baseball and Softball and through the years ended up with many “adopted grandchildren”. Later in life, he enjoyed managing the press box for the Little League World Series Senior and Big-League softball tournaments. You could always count on Eschol having a smile on his face and a joke on his lips. He will be deeply missed, but his love will never be forgotten. He is survived by his loving partner, Barbara Berkley; his children, Robin L. Mariner and his wife Cathy, Kathie L. Payne, Terri L. Wyatt and her husband Michael, Mark E. Mariner and his wife Teresa, and Marcia A. Elliott and her husband Jay; his nephew, Michael Myers and his wife Jennifer; grandchildren, Stephen M. Mariner, Brandon L. Mariner, Justin S. Mariner, Amy L. Littleton, Shane P. Payne, Staci M. Wyatt, Wayne M. Wyatt, Eric J. Wyatt, Jason E. Mariner, Matthew Hoster, Jessica L. Marine, Mark L. Wilson; step-grandchildren, Alissa Elliott and Kim Elliott; seventeen great grandchildren and several nieces and nephews also survive him. In addition to his parents, Eschol is preceded in death by his loving wife, Effie M. Mariner, his sister Marian Myers, his grandson, Brannon Mariner, and his great grandson, Marvin Mariner. A funeral service will be held at 12:00 pm Wednesday, July 10, 2019 at the Hannigan, Short, Disharoon Funeral Home, 700 West Street, Laurel, Delaware 19956. A visitation will be held on Wednesday from 11:00 am – 12:00 pm. Mike Myers will officiate. Interment will follow in Laurel Hill Cemetery. In Lieu of flowers, the family suggest donations be made in Eschol’s memory to Delaware Hospice, 100 Patriots Way, Milford, Delaware 19963 or Laurel Little League.

Eschol J. Mariner, age 88, of Laurel, passed away peacefully at home on Saturday, July 6, 2019 surrounded by his loving family. Born in Laurel, he is the son of the late Eschol M. Mariner and Nellie M. Wootten Mariner. Eschol graduated from... View Obituary & Service Information

The family of Eschol J. Mariner created this Life Tributes page to make it easy to share your memories.

Send flowers to the Mariner family.