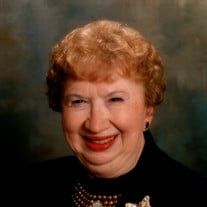 Emily H. Womach, 91, passed away on Tuesday, May 29, 2018 at Asbury Methodist Village, Gaithersburg, MD. Born Jan. 27, 1927 in Laurel, DE, she is the daughter of the late Elon and Jennie Hitch. Emily is a graduate of Salisbury Business Institute, Northwestern University School of Financial Public Relations and Rutgers University, Stonier School of Banking. Emily began her career at Sussex Trust Company, Laurel, DE working 23 years achieving the position of Vice President. In 1968 she was the Administrative Assistant to the Governor of Delaware, Charles E. Terry, Jr. She was elected Treasurer of the State of Delaware from 1971-1973. In 1972 Emily ran as the Democratic candidate for Governor of Delaware. She is a Founder and was President and CEO of the first federally-chartered women’s bank in the United States, The Women’s National Bank, Washington, D.C. From 1973 to 1992, she was Vice President, Farmers Bank of the State of Delaware; President, International Financial Advisory Services in D.C.; and Director of Marketing, Asbury Methodist Village, Gaithersburg, MD. During her career Emily was involved in many community projects, held positions on various boards and was awarded numerous awards. She was appointed to The President’s Commission on Executive Exchange by President Jimmy Carter. She served on the Delaware State Bank Advisory Board, the Business & Development Committee of D.C., and the D.C. Employment Security. She is a Charter Member of the Order of the Eastern Star, Laurel Chapter, #18 and a Member of the Sussex Chapter, #7. Preceded in death by her husband, William (Bill) S. Womach, her son W. Richard (Dick) Womach, and her siblings; Leonard Hitch, Doris Culver and Carolyn H. Wright. Emily is survived by her grandchildren, Brian Womach and his wife Suzanne of Shavertown, PA. and Kristine Rodenizer and her husband Curt of California, MD. Great grandchildren, Aaron Rodenizer and his wife Chelsea of Leonardtown, MD, Logan Womach, Sara Womach and great-great grandchild Layne Rodenizer. She is survived by her sister-in-law Caroline Hitch of Milford, DE and numerous nieces and nephews. Funeral service will be held at 12:00 noon, Wednesday, June 6, 2018, at Hannigan, Short, Disharoon Funeral Home, 700 West Street, Laurel, Delaware 19956. Viewing will be 11:00 am to 12:00 noon. Interment to follow in Odd Fellows Cemetery.

Emily H. Womach, 91, passed away on Tuesday, May 29, 2018 at Asbury Methodist Village, Gaithersburg, MD. Born Jan. 27, 1927 in Laurel, DE, she is the daughter of the late Elon and Jennie Hitch. Emily is a graduate of Salisbury Business Institute,... View Obituary & Service Information

The family of Emily H Womach created this Life Tributes page to make it easy to share your memories.

Send flowers to the Womach family.