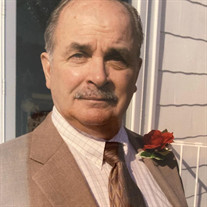 Edwin A. Young, Jr. age 84, of Laurel, passed away after a brief illness at TidalHealth PRMC in Salisbury, Maryland surrounded by his loving family. He was preceded in death by his parents, Edwin A. Young, Sr, and Mildred Jordan Young formerly of, East Fallowfield TWP, Pennsylvania, sister Barbara Jean Young Whiteman of Northampton PA, his previous wife Barbara A. Young of Laurel, brother-in-law William E. (Billy) Lewis of Willards and his beloved dogs Brewster and Butter. Survived by his wife Connie Lewis Young, stepdaughter Sharon Phillips Taylor (David) of Willards; step-grandchildren Brandon Taylor of Parsonsburg, Andrew Taylor of Willards and Glenda Taylor of Swainsboro, GA, and her four children (Glenda called “Pop Pop Ed” her boyfriend when she was a little girl); Sisters-in-law Peggy Moore (Donald) of Parsonsburg, Betty Davis of Pittsville, Jean Johnson (Bill) of Matthews, NC, Shirley Warrington of Venice, FL, step-nieces Theresa Warrington, Nokomis, FL, Carol Warrington of Stuart, FL, Natalie Moore of Salisbury, Michelle Lewis of Pittsville, Terri Whiteman Nicholson of Bethany Beach and nephews Tom Whiteman of Whitehall, PA and Dave Whiteman of Northampton, PA. Ed leaves behind his special 4-legged kids; Bootsie, Bambi, and Biscuit. He graduated from Tredyffrin-Easttown High School in Berwyn PA, Class of 1955, and served 8 years in the US Air Force and Air Force Reserve where he was a jet engine and airplane mechanic. He continued his career in the field of aviation. Ed owned and operated Aircraft Inspection and Maintenance, Inc, at the Laurel Airport, Laurel DE, and was the airport manager from 1980 until he retired in 2002. He had 5 certifications through the FAA as an Air Frame and Powerplant Mechanic, Flight Instructor, Restricted Radiotelephone Operator, Commercial Pilot and Ground Instructor. He also taught night classes at the Dover Air Base in the early 1970’s. He was a member of First Church of Christ, Science, in Salisbury. Ed was a kind and quiet man and was loved very much by his family. A newspaper article was published in 1999 about all the various activities at Laurel Airport under Ed’s management, where the writer referred to Ed as “a no-nonsense man”. He liked art and wood-carving, wildlife and nature as well as dogs. He enjoyed the simpler things in life. Ed requested there be no formal service. If anyone would like to honor his memory, his family suggests donations to their favorite charity, a wildlife organization or animal shelter. Arrangements are in the care of the Hannigan, Short, Disharoon Funeral Home in Laurel, Delaware.

Edwin A. Young, Jr. age 84, of Laurel, passed away after a brief illness at TidalHealth PRMC in Salisbury, Maryland surrounded by his loving family. He was preceded in death by his parents, Edwin A. Young, Sr, and Mildred Jordan Young formerly... View Obituary & Service Information

The family of Edwin A. Young Jr. created this Life Tributes page to make it easy to share your memories.

Send flowers to the Young family.