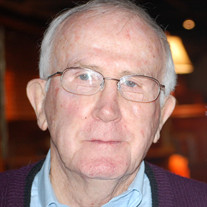 Edward M. Hannigan, 82, of Dover, DE, passed away on March 28, 2019, at Nanticoke Memorial Hospital in Seaford, DE. He was a highly decorated veteran in the United States Air Force and a loving family man. Mr. Hannigan, son of the late William and Nora Hannigan, was born in South Boston, MA, on Sept. 18, 1936. After graduating from high school, he enlisted in the United States Air Force. During his 30 years of active duty, he served as a loadmaster on the C-5 Galaxy and various other aircraft and earned the highest enlisted rank in the Air Force as Chief Master Sergeant - leading to his endearing nickname among family and friends, "Chief." Mr. Hannigan is a veteran of the Korean, Vietnam and Iran-Iraq wars, and throughout his career, he was stationed in Dover, DE, Taiwan, Dyess, TX, and Langley, VA. He was proud of our country and served with honor and devotion. After retiring from the Air Force, Mr. Hannigan graduated from Delaware Technical and Community College and went on to work in Civil Service at Dover Air Force Base for more than 26 years, before retiring at the age of 80. He is survived by his wife of 59 years, Irena Hannigan, of Dover, DE; daughter, Dr. Dianna Hannigan Glessner, and her husband, Gary, of Alpharetta, GA; son, Edward S. Hannigan, and his wife, Holly, of Laurel, DE; three grandchildren, Stephanie Glessner, Caroline Glessner and Ryan Hannigan; and many nieces, nephews, extended family members and close friends. He is preceded in death by his parents and his three siblings, William Hannigan, John Hannigan and Barbara Merlin. A viewing will be held on Friday, April 5, 2019, from 6 - 8:30 p.m., at the Hannigan, Short, Disharoon Funeral Home at 700 West Street, Laurel, DE. A mass celebrating Mr. Hannigan’s life will take place on Saturday, April 6, 2019, at 11 a.m, at Our Lady of Lourdes Catholic Church at 532 East Stein Highway, Seaford, DE, and will be officiated by the Father Clement Vadakkedath C.ss.R. A visitation will be held at the church one hour prior to the service, and an interment with military honors will follow in Odd Fellows Cemetery in Laurel, DE. Memorial gifts can be made in Mr. Hannigan’s memory to Nanticoke Health Services Foundation, 613 High Street, Seaford, DE 19973. Online condolences can be made by visiting www.hsdfuneralhome.com.

Edward M. Hannigan, 82, of Dover, DE, passed away on March 28, 2019, at Nanticoke Memorial Hospital in Seaford, DE. He was a highly decorated veteran in the United States Air Force and a loving family man. Mr. Hannigan, son of the late William... View Obituary & Service Information

The family of Edward M Hannigan created this Life Tributes page to make it easy to share your memories.

Send flowers to the Hannigan family.