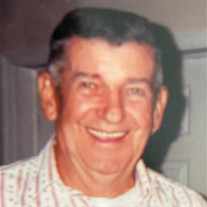 Earl Jennings Jefferson, Sr., 92, passed away on Thursday, August 27, 2020 at his home surrounded by his loving family. Born on May 12, 1928, at home, in the Sycamore community of Laurel, he was the son of the late Harry and Nellie Hitchens Jefferson. Earl attended school at Sycamore and later Laurel High School. As a young man, he began his lifelong career as a carpenter and a mason working for O’Neal Brothers, Tom Moore Masonry and Gallo Masonry. He retired in 1989. He enjoyed hunting, playing baseball and shuffle board. His memberships included the Laurel Beagle Club, National Rifle Association and the Laurel American Legion Post #19. For a period of time, Mr. Jefferson had served his country in the Army National Guard based in both Laurel and Seaford. In addition to his parents, he was preceded in death by a daughter, Renee A. Northam (Pat) in March 2012 and by a brother, Alvin Jefferson (Beulah). He is survived by his wife, the former Aileen Frances Parks, whom he married in June 1954; a daughter – Robin Griffith – Lank (Lawrence); a son – Jay Jefferson (Joyce); 5 grandchildren – Holly Cay (Kenny), Wendy Peterman (Barry), Aaron R. Jefferson (Kelly), Noel A. Jefferson & Jennifer R. Northam; 5 great grandchildren; 2- sister-in-laws- Joanne Tall (Buddy) & Pat Creighton (Donald); and several nephews & nieces, including a special niece, Sandra F. Jefferson. A graveside funeral service will be held on Wednesday, September 2, 2020 at 12:00 o’clock noon at Odd Fellows Cemetery, Laurel, DE with Pastor Dave Seymour officiating. There will be a Walk – Through Viewing on Wednesday Sept. 2 nd from 11:00 A.M. to 11: 45 A.M. at the Hannigan, Short, Disharoon Funeral Home, 700 West Street, Laurel, DE 19956. Memorial contributions may be made to Vitas Healthcare, 30265 Commerce Drive, Suite 202/203, Millsboro, DE 19960 or to the American Legion Post #19, 12168 Laurel Road, Laurel, DE 19956. Online condolences may be sent to the Jefferson Family by visiting www.hsdfuneralhome.com

Earl Jennings Jefferson, Sr., 92, passed away on Thursday, August 27, 2020 at his home surrounded by his loving family. Born on May 12, 1928, at home, in the Sycamore community of Laurel, he was the son of the late Harry and Nellie Hitchens... View Obituary & Service Information

The family of Earl Jennings Jefferson Sr. created this Life Tributes page to make it easy to share your memories.

Send flowers to the Jefferson family.