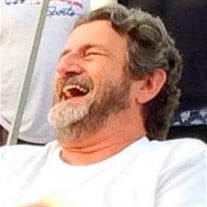 David T. Elzey “Pastor Dave”, age 64, of Bethel, Delaware went to be with the Lord surrounded by his loving family on September 7, 2019. David was born in Cambridge, MD a son of the late Charles “Bunky” and Ida Frances Elzey. David was a Methodist minister, and his proudest moment was when he became the pastor at Wesley United Methodist Church in Seaford. During his ministry, he was honored to have started the “Soup Social” which began at Christ United Methodist Church and is now at Centenary Church. David had a love of music he once was a drummer in band in his early years. He was a member of Hope Lodge #4 in Laurel. He loved to watch the waves at the beach, and watch the Yankees and the Broncos on television. He enjoyed voulentering at Paws for people, with his dog Maggie. David is survived by his wife Pastor Beth Elzey of Bethel. His son, Bryant Elzey, Sr. of Bethel. His daughters, Leigh Ann Elzey of Seaford, Amy Organ of Pittsburg and Sarah Nunnally of New Burn, NC. His brothers, Steve Elzey of Lewes and Charles “Ricky” Elzey of Georgetown. A sister Beth Wilkins of Laurel. Grandchildren, Chelsea, Kevin, Ashlyn , Megan, Bryant Jr., Elias, Skyler, Breelyn, Harper, Austin and Courtland. Great grandchildren, Teagan, Sage, Mellonie, Samaya, Zaiden, and Isabella. He is also survived by his mother in law, Pastor Barbara Wilson. Several nieces and nephews also survive him. In addition to his parents he is preceded in death by two grandchildren, Jonas and Joel. Contribution in David’s memory may be made to: Wesley United Methodist Church 22025 Atlanta Rd, Seaford, DE 19973 or the Alzheimer's Association 108 N Bedford St, Georgetown, DE 19947 or PAWS for People P.O. Box 9955 Newark, DE 19714. A viewing will be held at the Hannigan, Short, Disharoon Funeral Home in Laurel, DE on Friday September 13, 2019 from 6-8:00 pm. A Funeral Service will be held on Saturday September 14, 2019 at Wesley United Methodist Church in Seaford at 1:00 pm, a viewing will also be held from 11am-1pm. The Rev. Rich Evans will officiate.

The family of David T Elzey created this Life Tributes page to make it easy to share your memories.

Send flowers to the Elzey family.