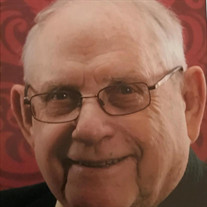 Dallas Kenneth Collins, 84, of Laurel passed away at his home on Sunday, September 13, 2020. He was born on Dec. 10, 1935 in Wilmington, DE and was a 1954 graduate of Laurel High School. A lifelong resident of Laurel, Mr. Collins had served in the Delaware National Guard from January 1954 until January 1960. He was an avid surf fisherman, a CB enthusiast known as “Cigarman” and a Classic Car admirer. He especially enjoyed passing time with his tackle shop and filling station buddies. Mr. Collins had worked for many years at the Beacon Feed Mill in Laurel where he was a Plant Manager and later he worked for Power Trans in Bridgeville for 20 years, where he was an industrial parts salesman, before retiring in 2000. He was preceded in death by his step-father and mother, George William & Katherine Collins Parsons. A dedicated husband, father and Pop-Pop, Dallas is survived by his wife of 62 years, Joyce Ann Gilbert Collins; a son – Brad Gilbert Collins (Deanna); a granddaughter – Paige Collins Parlier (Keith) & a grandson – Travis Gilbert Collins. A graveside funeral service will be held on Tuesday, September 22, 2020 at 1:00 P.M. at Cokesbury U.M. Church Cemetery, 5939 Cokesbury Road, Rhodesdale, MD 21659 (Near Reliance). Pastor Blair Hall will officiate. There will be a Walk – Through Viewing at the Hannigan, Short, Disharoon Funeral Home, 700 West Street, Laurel, DE 19956 on Tuesday, September 22nd from 11:30 A.M. to 12:15 P.M. Memorial contributions may be made in Mr. Collins’ name to American Diabetes Association P.O. Box 15829 Arlington, VA 22215. The Hannigan, Short, Disharoon Funeral Home Laurel, DE is serving the Collins Family.

The family of Dallas Kenneth Collins created this Life Tributes page to make it easy to share your memories.

Dallas Kenneth Collins, 84, of Laurel passed away at his home...

Send flowers to the Collins family.