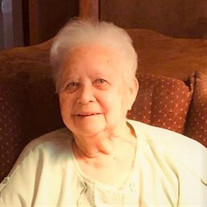 Carolyn B. Horsey, age 86, of Laurel, passed away on September 10, 2018 at her home surrounded by her loving family. Born in Delmar, she is the daughter of the late Courtland Thomas Brown and Polly Joyce Hart Brown. Carolyn was a wonderful homemaker. She enjoyed quilting, knitting, sewing, painting and was known for making the most delicious homemade donuts. Carolyn was a member of the Avon Park Church of the Nazarene in Avon Park, Florida, and the Laurel Church of the Nazarene. She had played the organ and piano, and taught Sunday School for many years. She had volunteered for Meals on Wheels in Florida and had a Sunday School ministry at Seaford Genesis for over 30 years. Carolyn enjoyed spending time with her grandchildren, playing cards and socializing with her friends and family and will be dearly missed. She is survived by her husband, Robert A. Horsey of Laurel, four daughters, Pam Lilley (Dave) of Milton, Linda Shaughnessy (Jim) of Manchester, New Hampshire, Brenda Jester (Fred) of Seaford, and Joanna O'Neal (Wayne) of Laurel, and also like a son to her, Jim Bowden (Christine) of Georgetown. Carolyn is also survived by her 11 grandchildren, Trey Bowden, Meghan Beaulieu, Marci Hollis, Grant Owens, Rachel Kling, Seth Jester, Lindsay Richard, Ashley LaRose, Jaclyn O'Neal, Skyler Bowden and Shawn O'Neal, and also like a granddaughter to her, Maren Schiefke, 13 great grandchildren, her sister-in-law, Pat Horsey of Laurel, and 4 nephews, Mike Horsey, Wayne Horsey, Scott Brown, and Bobby Horsey. In addition to her parents, Carolyn was preceded in death by her only brother, Homer Brown of Salisbury, Md. A Celebration of Life will be held on Saturday, September 15, 2018 at 2:00 pm at the Hannigan, Short, Disharoon Funeral Home, 700 West Street, Laurel, Delaware 19956. A visitation will be held at the funeral home one hour prior to the service. Pastor Ryan Hollis will officiate. Interment will be private. Contributions may be made in Mrs. Horsey’s memory to; Delaware Hospice, 100 Patriots Way, Milford, Delaware 19963 or The Avon Park Church of the Nazarene, 707 West Main Street, P.O. Box 1118, Avon Park, Florida 33826.

Carolyn B. Horsey, age 86, of Laurel, passed away on September 10, 2018 at her home surrounded by her loving family. Born in Delmar, she is the daughter of the late Courtland Thomas Brown and Polly Joyce Hart Brown. Carolyn was a wonderful... View Obituary & Service Information

The family of Carolyn B. Horsey created this Life Tributes page to make it easy to share your memories.

Carolyn B. Horsey, age 86, of Laurel, passed away on September...

Send flowers to the Horsey family.